Audio Perfectionist Sdn Bhd, distributor for the renowned McIntosh range of high end hi-fi and AV electronics from the U.S and Focal, one of France’s largest manufacturers of high performance speaker system will be fielding a super system centred around the fabled Focal Grande Utopia EM Speaker.

Flagship of the four model Utopia Series the Grande Utopia EM is a hi-fi enthusiast’s wet dream come true. A mammoth of a speaker the Grande Utopia measures an massive 2,012 x 654 x 880mm and weighs an unbelievable 260 kg!

According to Kenny Lim of Audio Perfectionist the Focal Utopia Speaker Series is designed for a cost-no-object loudspeaker performance that will cause even the most hardened audiophile to drool. The Grande Utopia will undoubtedly also cause some to weep! 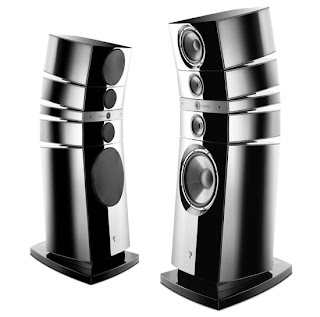 A refinement of the original Grande Utopia first launched in 1995 the current model is a third-generation design with significant improvement in both enclosure and drive unit technology.

Lim described the unique aesthetics of the enclosure of the Grande Utopia as an acoustical sculpture where 5 separate tiers individually houses 5 separate, custom built drive units. The largest of the tier at the bottom houses a powerful 40cm (16 inch) woofer of a proprietary design.

The other four tiers house a 27cm bass/midrange, two 16.5cm midrange and a 27mm beryllium tweeter. Inspite of its impressive bulk that exudes an immense aura of unlimited power and capability the Grande Utopia is surprisingly easy to drive. Its high sensitivity rating of 94 db sound pressure level means amplifier compatibility level is high, says Lim who adds that in reality a speaker of the Grande Utopia’s status usually demands an amplification system of near equal status.

That explains the choice of McIntosh amplifiers in providing an optimum drive for the Grande Utopia’s demo at this year’s KL International AV Show 2012.

In addition to Focal, Audio Perfectionist will also be fielding the complete range of amplifiers, processors and universal disc players from McIntosh, speakers from Austria based Vienna Acoustics, Carey Audio and many more.