There are some audiophiles who say that Furutech is a poor man's Oyaide.
I beg to differ. After using the Furutech FI-11M(G) and FI-11G American plug and IEC connector for a DIY power cable project, I can state with some amount of certainty that Furutech ain't nobody's poor cousin. I think that reputation came about because Oyaide's plugs are more expensive than Furutech's.
I have with me the Oyaide Tunami GPX and the Furutech Reference 111-N1 power cords. Both are top-of-the-range models; both have won many awards; and both have been highly praised. Fans of the Tunami even claim that it is the best power cord in the world.

The Oyaide Tunami GPX power cord
I spent the past two days testing the two, switching them from CD player to power amp and found that the two are excellent power cords but had different characters.
The system I used comprised: CEC3300 CD player used as transport, MIT Terminator 3 coax, Musical Fidelity A3-24 DAC, Alphacore Micropurl Silver interconnects to the Sugden C28 preamp (which has a fixed power cord), DH Labs Air Matrix interconnects to the Bryston 3B SST power amplifier and Mapleshade Clearview Double Helix speaker cables to the ATC SCM40 floorstanders.
I used the DH Labs Power Plus for the CEC CD player and the Isotek Elite power cord for the DAC.
Using Eva Cassidy's Live At Blues Alley's first three tracks - Cheek to Cheek, Stormy Monday and Bridge Over Troubled Water - and the second and third track of Songs of Janis Joplin All Blues'd Up (a HDCD CD) - Move Over by Tad Robinson and Ball And Chain by Etta James - I tried hard to pick out the differences. 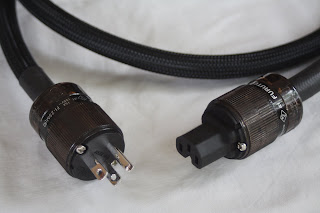 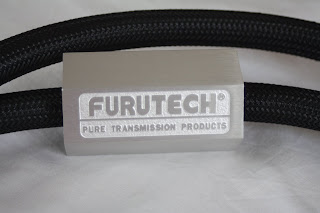 The Formula GC-303 EMI-Absorbent
Module on the Furutech cable
First I alternately used the Furutech and Oyaide cords to power the 150-watter Bryston. Using the cords for the power amp showed up quite discernible differences.
The Oyaide Tunami had a darker tonal balance with more emphasis on the mid-bass and low bass. This had the effect of smearing some micro details, but the sound was richer.
Vocals were rendered with a richness that seemed valve-like and the mids seemed thickly textured which led to micro details getting somewhat hidden in the smooth presentation. Leading edges of electric guitar, horns, piano and cymbals were rounder and less "explosive".
The highs were there, but seemed slightly darker than the Furutech and had the effect of merging with the music instead of standing out. Cymbals and electric guitar sounded a bit dim.
Both power cords were dynamic and open, but the Tunami's bassy lushness made it sound less transparent than the Furutech.
With the Furutech Reference 111-N1, the sound quality was immediately noticeably very transparent and open. Low bass and mid-bass were rendered well, with double bass and bass guitar notes rendered with sufficient weight and punch, but it did not have a bassy emphasis like the Tunami.
Tonally, the Furutech was neutral - the mids and vocals were natural with no lushness and the leading edges of electric guitars, horns, piano and cymbals were sharper and more "explosive" - everything sounded more like live music.
Since the highs were clean and clear and extended, the timbres of instruments were more accurate, especially the high notes on the piano.
Both cords had very low noise floors and neither power cord projected the vocals forward like some other makes do. The soundstage was just right with the singer in the middle perhaps just a bit in front of the speakers. At this moment, I am listening to The Heart of the Matter: Frank Sinatra sings about love, a compilation that I bought from Starbucks and ol' Blue Eyes is just a few feet in front of me serenading about the old black magic called love...
Then I decided to plug the DH Labs Power Plus to the Bryston and test the Oyaide and Furutech on the CEC CD player. Some people opine that differences between power cords are more apparent with CD players.
However, in this instance switching power cords on the CD player showed fewer differences with the Tunami sounding more like the Furutech. In fact with the Tunami, the mids became clearer and less mushy, the leading edges of music became sharper and the highs were cleaner and clearer when it powered the CD player than when it was plugged to the power amp.
With the Furutech, all the qualities that it revealed when it was used with the power amp were still there when it was plugged to the CD player.
In the end, I used the Tunami for the CD player, the Furutech for the power amp and the DH Labs for the DAC and spent the rest of the afternoon just listening to great music.
So, which one should you buy? In terms of price the Tunami costs a grand plus while the Furutech costs four times more.
As for sound quality, would the outstanding neutrality, timbral accuracy and transparency of the Furutech be worth the extra cost?
Test both before deciding...
Email Post