A tale of two sub-woofers

Audiophiles are accustomed to sub-woofers that are shaped like boxes. It is only a question of whether they are big or small, rectangular or "cubish" boxes.
Thus at the recent KL International AV show, some were puzzled when they saw two odd-looking sub-woofers.
Behind the Wilson Benesch ACT C60 Limited Edition speakers was a weird drum-like object. 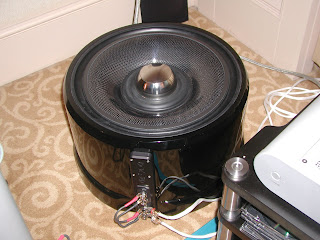 The Torus Infrasonic Generator
That turned out to be Wilson Benesch's Torus Infrasonic Generator which uses an 18-inch diameter carbon fibre diaphragm in push-pull drive.
Judging from the great amount of sub-sonic sound created in the room, the small drum seemed pretty effective.
At the huge hall where the big Vitus amps were driving the Marten Coltrane Supremes, audiophiles were surprised to see four speakers being driven. 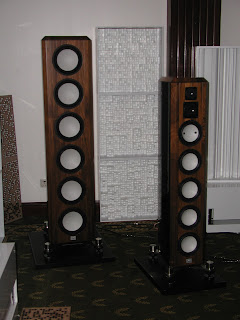 The Marten Coltrane Supreme Sub-woofer is at left.
Standing beside each Marten Coltrane Supreme tower speaker was another taller tower (36cm W x 176cm H x 50cm D) with six nine-inch ceramic white woofers. This is the Coltrane Supreme Sub-woofer which creates the subsonic sound waves from 15-100Hz and has an active crossover with active digital room correction
The speakers, which come as two pairs, feature lots of drive units - the tower itself (26cm W x 137cm H x 40cm D) has four 7" ceramic woofers, one 7" lower-mid ceramic, one 2" diamond mid and one 3/4" diamond tweeter which handle the frequency range from 90Hz to 100kHz.
Frankly, it was the first time I had ever come across such a speaker system.
Email Post