There are still some experienced audiophiles who swear by the Quad electrostatic ESL57 and ESL63 speakers which they say offer the best midrange extant.
The Quad ESL57 was produced from 1957 till 1983 while the ESL63 was made from 1981 till 1999 after which it was replaced by the ESL988 and 989.
However, problems arise when the Quads, especially the older ones, start arcing and go bust. Where can a Quad owner go for repairs?
Actually there are not that many experts in the world who can repair Quad electrostatic speakers. There are only a handful in England, a few in Europe, a couple in the United States and at least one in Australia. In South-East Asia, I have not heard of any (please correct me if I am wrong) but just the other day I found one such expert on Quad electrostatic speakers smack in the middle of Petaling Jaya (for the benefit of overseas readers, this is in Selangor, Malaysia). In Amcorp Mall to be exact.
When I walked into Acoustique Systems I saw C.N. Lim at his usual place at his desk in the front part of his cluttered shop. Something behind him caught my eye - it was a panel that looked vaguely familiar.
"Hey, that looks like a Quad. The ESL63?" I asked him. "No, the 57," Lim said.
"Wah, you can repair Quad electrostatic speakers?" "Yes, no prob," he replied.
And that was how I found out about Lim's expertise. I knew he could repair stuff - he fixed the Marantz CD63 KI that I owned before I picked up a Rega Apollo - but I did not know he belonged to that select circle of people who could repair Quad electrostatics. 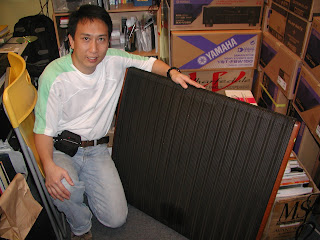 Acoustique Systems' C.N. Lim with one
panel of the Quad ESL57 that he repaired.
His link with Quads began when he worked with Jebsen & Jessen which was the distributor for Quad in Malaysia then.
He sold many pairs of ESL63 and Quad 66 preamps and 606 power amps when he worked for that company.
Lim thinks there are around 200 pairs of Quad ESL57 and ESL63 in Malaysia. He has repaired quite a few of them and one pair of ESL989 so far.
He sources parts from all over and the conductive coating is from Australia.
Not only can he repair and refurbish the Quad electrostatics, but he can handle Quad tube and transistor amps too.
Lim can be contacted at 012-3393738 or e-mail him at cnlimacoustique@yahoo.com
Email Post
Labels: 606 66 electrostatic ESL57 ESL63 ESL989 Quad