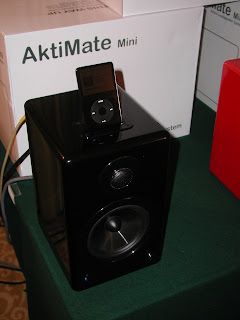 The AktiMate Mini with iPod docked 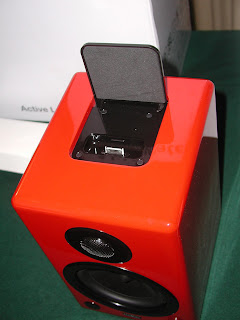 The iPod dock
Looks like the iPod is no longer considered a teenager's toy like last generation's Sony Walkman portable cassette player.
The iPod is now considered a serious hi-fi component much like a CD player. Several high-end firms now offer components with iPod docking stations such as the Chord Electronics Indigo preamp/DAC/iPod dock and Krell which has launched its KID (Krell Interface Dock) which is an iPod preamp.
At the recent KL International AV Show, I saw an interesting product which sounded surprisingly good.
It was called the AktiMate Mini and was on display at the Audio Visual Designs Sdn Bhd room. They were bookshelf active speakers with a dock for an iPod. One speaker is the active master and the other is the passive slave.
When I heard them I thought they sounded rather good and did not know why until I reached home and read the brochure.
The AktiMate Mini uses technology licensed from Creek and Epos, so you are effectively hearing a Creek amp driving Epos bookshelf speakers measuring 300 x 185 x 210 mm (12 x 7½ x 8½ ins).
Power output is 40W RMS into 4 Ohms, the woofer is a 130mm moulded polypropylene with shielded magnet and the tweeter is a 25mm metal dome. Frequency response is rated at 50Hz to 22kHz and there is an output for connection to a subwoofer.
It has normal RCA inputs at the back for your CD player or tuner and an input for an MP3 or MP4 player.
The AktiMate Mini, which comes in black, white and red, is just right for a second system.
Email Post