How much are you willing to pay for sonic heaven? How much is enough? There are people with very deep pockets for whom the sky is the limit and they spend a mountain of cash on their sound systems, but fail to knock on the gates of sonic heaven.
That is probably because they did not check out the Vitus Audio range of products. Most high-enders would have auditioned components from more famous companies like Audio Research, Bryston, Boulder, Pass Labs, Mark Levinson, Krell, Spectral, FM Acoustics, Goldmund, McIntosh, Ayre and a few other high-end manufacturers.Vitus Audio is arguably not as well known as, say, Krell or Mark Levinson, but this Danish manufacturer can take on any of the top brands in the world and possibly thrash some of them.
Yesterday, I had the chance to listen to a sound system that costs $363,000 in Malaysian ringgit (that amounts to about US$145,200; US$1 = RM3.50)), excluding the cost of the interconnects, power cords and speaker cables. In Malaysia, that amount of cash can buy a double-storey link house in Subang Jaya or a comfortable condo in a decent part of Kuala Lumpur. 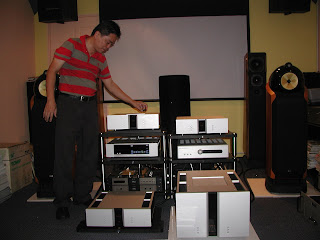 Eugene Ngoh of Audiomatic on the first floor of Amcorp Mall in Petaling Jaya had set up a system comprising a Vitus Audio SCD-010 Mk II CD player (RM68,000), a Vitus Audio SL-101 line stage (RM110,000), a Vitus Audio SS-101 Mk II integrated amplifier (RM120,000) and a pair of B&W 802Ds (RM65,000).
Interconnects and power cords were Wireworld, speaker cables were Furutech while he used the Vitus Andromeda power cord (priced at RM8,500 but is given free with the Vitus component that you buy) with the CD player.
I had with me just two CDs that I normally use to test equipment with - Eva Cassidy's Live At Blues Alley and Dire Straits' Brothers In Arms (xrcd version).
The SS-101 amp offers Class A (50 watts) or Class AB (100 watts) amplification. I chose the Class A mode and played the Eva Cassidy CD. 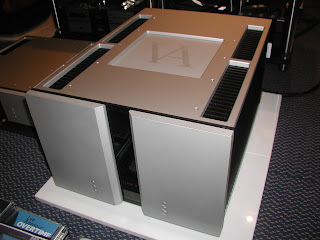 When the late Eva, who surely must be in heaven, sang "I'm in heaven" for a moment I thought I was.
I heard a lot more detail - the crowd seemed to be murmuring just after the applause following her introduction by the emcee, I heard more details like Eva breathing and the acoustics of the venue seemed clearer than before.
What was most striking was the timbre of instruments - the guitar, piano, horns and others. They seemed just right. Also the leading edge and trailing edge of music seemed accurate, especially the cymbals.
Many systems have problems reproducing the "thwack" of the drumstick hitting the cymbal and the complex metallic textures as the sound fades away. This has much to do with the quality of the diamond tweeter, but the amp must also be able to reproduce the highs without hardness and without rolling off. The only other time that I heard cymbals reproduced so richly and clearly was when I tested the JM Labs Micro Utopia Be which has a beryllium tweeter.
Many systems would also face problems at the other end of the sonic spectrum, reproducing the thud and slam of the bass drum and bass guitar.
When I played Dire Straits, the kick-in-the-tummy slam and robust bass were there. The bass was neither excessively rich nor loose; it was just right.
"Right"is the perfectly right word to describe the Vitus-based system I heard. I just could not find anything wrong. The speed and dynamics were just right too. Soundstage? Right. Imaging? Right.
Bear in mind I tested the Vitus amp in 50-watt Class A mode and it sounded as powerful as the 150-watt Bryston 3B SST in my home rig. Though the B&W 802D is rated at 90dB in sensitivity, the B&Ws generally have a reputation of being difficult to drive.
Since the Vitus sounded so good in Class A, I did not bother to switch to Class AB. And it seemed to run relatively cool - I have Sugden C28/P28 pre-power amplifiers which are Class A/AB and they run much hotter. 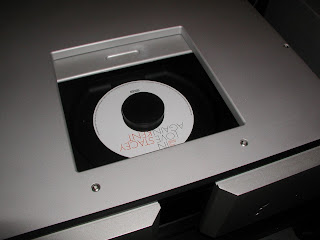 Slide open the drawer, put in a CD, place the puck and play.


The SCD-010 Mk II CD player is top-loading with a sliding cover and you have to weigh down the CD with a quite light puck before playing. It features the DSP based (Digital Signal Processing) module from Anagram Technologies which upsamples to 384Khz. I believe this is the same technology that the Cambridge Azur 740C and 840C CD players use.
The Vitus SS-101 is huge, measuring 17" wide x 11.5" high x 23.5" deep and weighs 176 lbs. In terms of looks, the Vitus components look very German - clean, functional and industrial.
But audiophiles do not pay big money for looks - at least they should not - but for sound quality.
In the case of the Vitus-based system I auditioned, the sound quality was excellent but at a very high price.
You can actually cut the total cost by RM110,000 (about the price of a Honda Civic) by doing away with the SL-101 line stage because the Vitus SS-101 has two inputs - one single-ended and the other balanced - and a high-quality volume control that has only one resistor in series with the signal at any volume setting.
But even without the line stage, the system still costs a cool quarter million ringgit.