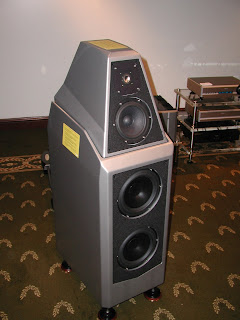 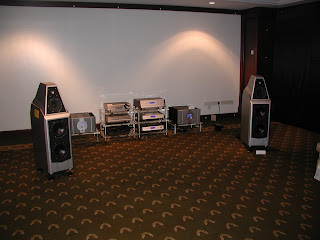 The Wilson Audio Sashas driven by Pass Labs pre/power
amps and the DCS Scarlatti three-piece CD player
The Wilson WATT/Puppy system has been an icon of high-end hi-fi for a good many years even though there were other speakers, often costing more, that could outclass it. Often it seemed as if any AV show would not be considered an AV show if Wilson Audio's Watt/Puppy system was not featured.
The WATT/Puppy system evolved eight times and the ninth version was seen and heard by audiophiles at the KL International AV Show which ended last night.
However, it wasn't called Wilson WATT/Puppy Nine; instead it was labelled Wilson Audio Sasha.
At the show, it was driven by a three-piece DCS Scarlatti CD player system, and Pass Labs XP20 pre and X600.5 monoblock power amps. The hall was big and the system managed to fill it with great sound.
Wilson Audio's website has this to say:
> Both the new midrange/tweeter module and the bass cabinet have greater volume than WATT/Puppy System 8.
> The larger bass enclosure results in a 2Hz greater extension in the bass, and less congestion in the upper bass.
> Increased volume in the upper module allows a new bracing architecture and sidewall construction for greater rigidity and lower resonance.
> Sasha’s upper module utilizes Wilson’s newest proprietary cabinet material for its baffle, resulting in a lower noise floor and greater transparency in the critical midrange.
> By removing the crossover from the upper module, less midrange energy is reflected through the midrange driver cone, again improving clarity and transparency.
> Sasha incorporates both the 7” midrange driver and the tweeter from MAXX Series 3.
> Sasha’s woofers utilize a new motor/magnet assembly with more magnetic force for the same cone mass resulting in improved dynamics and acceleration in the bass region.
> The crossover is housed in the bass module, with resistor access on a rear panel. Custom wiring, hand-built at Wilson, connects all the drivers.
Woofers: Two – 8 inch (20.32 cm)
Midrange: One – 7 inch (17.78 cm)
Tweeter: One – 1 inch inverted dome (2.54 cm
Sensitivity: 91 dB @ 1 watt @ one meter @ 1kHz
Nominal Impedance: 4 ohms, 1.8 ohms minimum @ 92 Hz
Frequency Response: +/- 3 dB 20 Hz - 22 kHz
Overall Dimensions: Height – 44 inches (111.76 cm)
Width – 14 inches (35.56 cm)
Depth – 21.25 inches (53.91 cm)
System Product Weight: 197 lbs (89.36 kg)
Apparently it is priced slightly lower than the W/P System 8. I remember listening to the System Six some years ago. Version 9, aka Sasha, seems to have a better controlled bass.
At this price range, there are lots of competitors and audiophiles are advised to shop around.
Email Post