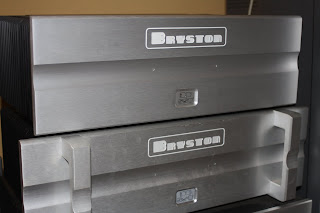 The Bryston 3B SST2 is on top.

There is no visible difference between the Bryston 3B SST and the new 3B SST2 power amp; the differences are inside the box.


The 3B SST2 has a push on/off power switch, new output devices, increased power supply capacitance (30,000 MFD per channel), two new ultra-low-noise power transformers (I have been corrected by Bryston's James Tanner - the transformers have not been changed), and lower noise and distortion levels.


Soon after I had finished reviewing the preamp (see http://hi-fi-avenue.blogspot.com/2009/12/brystons-synergy.html) I started to compare the Bryston 3B SST power amplifier with its successor.


The differences in sound quality are quite apparent - the mid is so much richer with the 3B SST2. Vocals are smoother and creamier.


This is evident more so with female vocalists than males. I listened to Barbra Streisand, K.D. Lang, Eva Cassidy, Cleo Lane, Susan Boyle, Charlotte Church, Joni Mitchell and they all sounded richer and fuller. I played Il Divo and the quartet's voices sounded creamier too, but the effect was not as great as it was with female voices.


The "smoothening" was not restricted to vocals only - the entire mid band had this creamy texture. In comparison the 3B SST sounded leaner, more analytical and detailed.


There was no difference in the treble between the two power amps. Both played high notes without grain and with great extension.


It was in the bass region that the two power amps again sounded different. The old 3B SST's bass had more slam and sounded fuller and deeper. The 3B SST2's bass was more polite, and lacked grunt and pace.


This difference in bass presentation could easily be heard just by playing two songs on the Wilson Audio Ultimate Reference CD - Fanfare For The Common Man and Mating Dance - which feature drums and percussion.


So it would appear to be a trade-off. With the 3B SST2, you get a richer mid with a less dynamic bass. With the older 3B SST you get a leaner and more analytical mid with a bass that has grunt.


It boils down to the type of songs you listen to.