World Cup to be broadcast in 3-D

The World Cup soccer tournament this summer will be broadcast in 3-D, but it cannot be confirmed if Malaysia will be among the nations that will have this new format.

ESPN said it will have a special 3-D channel for beaming live sports events and this will be set up in time for the FIFA World Cup which kicks off on June 11.

The channel will not operate 24 hours a day, but plans at least 85 live events in its first year, AP reported.

Discovery announced it will partner with Imax Corp. and Sony Corp. to bring out its own full-time 3-D network. The companies did not say which shows it will air on the new channel, which is to launch in 2011, the report said.

In an interview, ESPN's vice president for technology, Chuck Pagano, said the network is preparing for a "3-D tsunami" in the TV industry".

"It brings a sense of 'wow' when you watch a football game," he told AP. "It's just a new universe for watching TV coming down the pipeline." 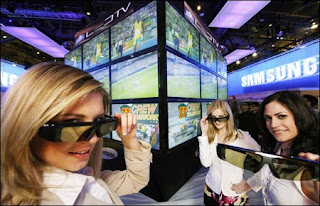 Home viewers will have to buy new TV sets and 3-D glasses.

Sony, JVC, Panasonic, Samsung and LG are planning to market 3-D TVs this year. They are debuting their 3-D TVs at the CES 2010 which opens on Jan 7 in Las Vegas.