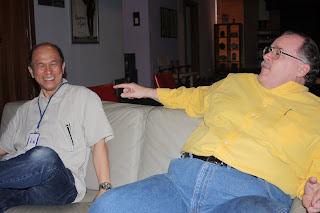 Brian Russell, president of Bryston Ltd, with his
Malaysian dealer James Tan of AV Designs Sdn Bhd.
Bryston amps for audiophiles will not be digital - this assurance came from Brian Russell, the president of Bryston Ltd, who was in town to meet up with his Malaysian dealers James Tan and C.W. Low of AV Designs Sdn Bhd.
During a chat with Brian at AV Design's showroom at Rohas Perkasa building in Kuala Lumpur yesterday, Brian was quite confident that Class D amplifiers would never be able to match class AB amplifiers in terms of solid punchy bass and the capability to provide the rush of current to push a speaker unit and then stop the cone movement.
"Class D amp technology is not the new direction of Bryston," he said when replying to a question whether the recent announcement of the production of two 8-channel zone amplifiers, the D-130Z Hybrid and the D-250Z Hybrid, which use Class D amplifier modules and Bryston-designed linear power supplies, signalled a paradigm shift in the direction of the highly-respected Canadian company.
Brian said these amps are meant for a segment of the market where high quality is not essential. These include night clubs, restaurants, ice rinks, condos and bars which need music or broadcasts in several zones. These amps can also be used for piped music.
For serious audiophile listening, nothing beats the Class AB amps, he said.
When asked why Bryston, famed for offering a 20-year warranty (the best in the industry) for its products, is offering only a five-year warranty for its Class D zone amps, he said it was because they could not control the quality of the outsourced digital amp modules.
"It doesn't mean that these are lower quality products," he said.
Brian also revealed that the SP-3 sound processor, replacing the SP-2, should be out in about six months' time.
"The software is being written and the SP-3 will be modular. It will offer audio with a video option," he said.
However, the SP-2 would not be upgradeable to SP-3 specs.
Another project in the works is a new CD player which, he assured, will have a metal drawer to replace the critically-acclaimed BCD-1. 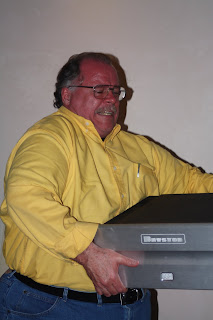 Brian Russell, president of Bryston Ltd, proving
that the 28B SST (square) power amp is
definitely not a lightweight Class D gizmo.
Brian said Bryston had a "great year" despite the global financial meltdown because of strong sales of its 28B SST (square) amps, DACs and CD players.
"The new range of SST (square) amps received rave reviews and were rated 'Best Buys' or 'Editor's Choice' by numerous magazines and websites, which helped us a lot," he said.
Sales in the United States went down, but it was up in Canada, Asia and Australia.
During the chat, I was quite surprised to find out that Bryston does not have a listening room in its factory to tune its products.
Instead two to three of its staff, including designer James Tanner, take the components home to test them with their rigs in a home environment.
"James has three stereo sets and four pairs of speakers - Thiels, PMCs, Magneplanars and Martin Logans. Whenever he comes across a new pair that sounds good, he buys them and they would replace a pair that he has in his house," Brian said.
Though much has been written about the synergy between Bryston amplifiers and PMC speakers, Brian declined to recommend the PMCs as the natural partner for Bryston amps.
"PMCs are transmission line devices and Bryston amps work well with them, but I would tell people that Bryston amps would work well with whatever speakers they like the best," he said.
On the future of the music industry, he agreed that people are veering towards music downloads from the Internet, but there will always be a CD guy with a huge collection of CDs that he would want to listen to with a CD player just like the turntable guy who is still listening to his LPs with his turntable.
Email Post
Labels: 28B sst av designs bcd-1 Bryston class d james tan sp-2 sp-3