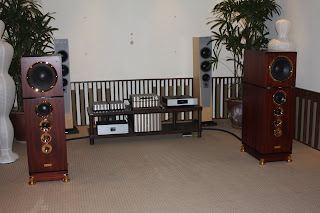 The huge speakers need a lot of space to 'breathe'.

Ah, rich folks live different lives; they also hear different things.
How about music coming from a pair of speakers that cost RM300,000 (the same amount needed to buy the condos that many of us live in) which have gold-plated speaker mounting rings? Even the feet (not spikes, given the weight of the speakers) are gold-plated. 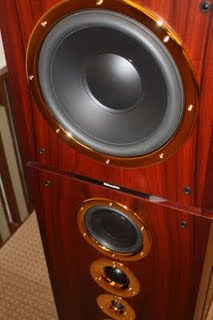 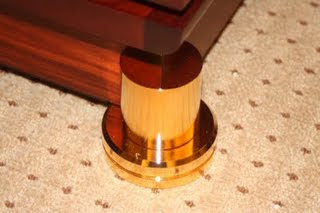 Even the feet are gold-plated 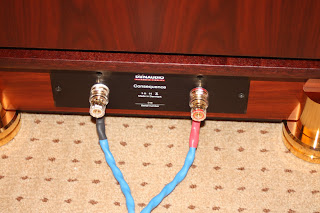 The speaker has only one set of speaker terminals. 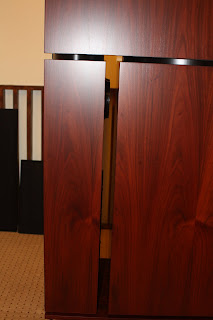 There is a gap between the front module

housing the mid and tweeter units and the 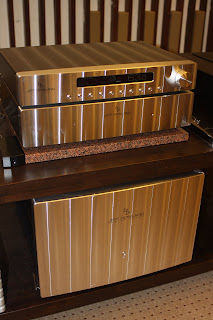 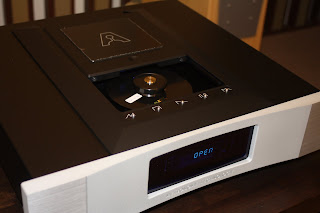 There I was listening to a system comprising the much-anticipated Dynaudio Consequence Ultimate Edition at CMY in Damansara Uptown, Petaling Jaya.
The huge speakers were driven by Jeff Rowland Criterion preamp (RM75k), Jeff Rowland Power 312 (500-watters retailing at RM60k) and the French high-end CD 5 player from Metronome Technologie (RM60k).
The speaker cables alone cost more than the pre and power amps - the Siltech Emperor Crowns are priced at RM150k. From CD player to pre, the interconnects were the Acoustic System LiveLine while from pre to power the Siltech SQ110 was used. Power cords were Siltech Ruby Hill and the power supply was connected to an IsoGray system.
As you can see (or calculate), I was listening to a system that costs about three quarters of a million bucks.
Yes, the rich live different lives.
I had with me the same three CDs that I used to audition the EgglestonWorks Andra III a few days earlier (I will post on that later) - the xrcd version of Dire Straits' Brothers In Arms, Eva Cassidy's Time After Time and A Tribute To Jack Johnson by Miles Davis.
The Dynaudio Consequence Ultimate Edition are huge speakers measuring (W x H x D) 43 x 133 x 63 cm, and require a large listening room for it to "breathe". If your room is small, look for another pair even if you have the cash.
The room at CMY measured 4.2 metres wide and around 17 metres long and I felt it was big enough for the speakers. A shorter room, at around 10 metres, would presumably be spacious enough too.
The speakers were placed about 0.75 metres from the side walls and about 2.5 metres from the rear wall. Listening space that is too cramped would prevent these speakers from performing at their optimum level. Weighing 114kg each, you would need a buddy to help you position them correctly.
When I heard them, they were only a week old at the showroom and were still breaking in, but they immediately stamped their mark as extremely refined and polished performers.
The soundstage was large and deep while the sound was extremely natural, smooth, civilised and refined. Its rated frequency response is 17Hz to 30khZ and nothing seems to be missing or emphasised in the music spectrum.
Tonally it was neutral and the bass was rich and full, thanks to its vented compound bass loading.
Despite it being a five-way system with crossovers at the critical midrange frequency of 1,400Hz to the mid dome and a quite low 2,700Hz to the tweeter unit, the sound was seamless without any noticeable crossover anomalies.
Although it was the first time I heard a speaker with huge bass units firing at me at ear level (the arrangement of speaker units is upside down with the super tweeter at the bottom and the bass at the top) the bass somehow emerged sounding like normal i.e. the bass drum sounded like it was perhaps half a meter from the floor while the cymbals sounded like they were maybe two meters from the floor even though the tweeters and super-tweeters were firing at me from the bottom of the speakers.
At this super high-end level, you do not expect to hear sonic weaknesses like rolled-off highs or lack of bass. Instead, you would look out for tone, air, timbre and presentation. After more than an hour of listening to good music, I found nothing to complain about.
However, since its sensitivity is low at 85dB, it needs a lot of power to push it.
In the system that I heard, the 500-watter Jeff Rowland did a commendable job, but I had this feeling that these speakers could soar even higher if a more powerful amp or perhaps a pair of Jeff Rowland's Model 301 monoblocks are used.
To be expected, only components of the highest quality must be used with speakers of such pedigree. Having said that, I do not mean that it is compulsory for you to use RM150k speaker cables - top-end cabling from your favourite firm should suffice - but if you have the dosh, why not?
Dynaudio has certainly made a statement with its Consequence Ultimate Edition and it is a very refined one at that.
Email Post
Labels: cmy consequence ultimate edition dynaudio jeff rowland metronome technologie siltech