Bang & Olufsen, often called simply B & O, is a prestigious audio company that somehow is not mentioned in the same breath as high-end firms like, say, Krell or Mark Levinson, despite the astronomical prices of its products.
Diehard audiophiles would scoff, roll their eyes, and say sarcastically, "Oh, that designer stuff."
But if one were to take a neutral stance and examine the situation carefully, Bang & Olufsen does deserve to be taken more seriously by audiophiles.
After all, isn't its Ice Power Class D amplifier module used by such esteemed high-end amp manufacturers like Bel Canto, Jeff Rowland and PS Audio? Didn't respected speaker company Martin Logan use B & O's Ice Power for its Purity, the world's first fully active hybrid electrostatic loudspeaker? Didn't B & W use the Ice Power for its sub-woofer?
Ice Power has also been used in Pioneer's Elite A/V receiver, Rotel amps, Elac sub-woofers and the Danish high-end Acoustic Reality triangular amps.
Danny Cheong, Director of Retail Operations of Ideal Lifestyles and Living Sdn Bhd (the B & O distributor in Malaysia), agrees that there is a stigma regarding Bang & Olufsen products despite the technology used in the components.
"Audiophiles don't take Bang & Olufsen seriously. They feel B & O is more of a lifestyle product. Yes, B & O products are expensive, but look at the quality. Aluminium of the highest grade and Ice Power are used. B & O is always ahead of its time and emphasises design," he said.
"Yes, it's design driven, but you must look at the technology too. It's not just a pretty product. It's technology designed to sit pretty in rooms," chipped in Mae Chan, the distributor's assistant marketing and communications manager.
"But B & O products deserve to taken more seriously by audiophiles. I invite audiophiles to our showroom to hear for themselves," said Danny Cheong.
Bang & Olufsen has opened its new showroom on the ground floor of Bangsar Village (New Wing) in the posh part of Kuala Lumpur. Its showroom in Starhill Gallery closed in March and it has been in Bangsar since July. 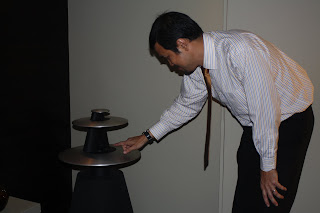 Danny Cheong explaining how the Acoustic
Lens on the BeoLab 5 speaker works.
At the showroom, you get to hear a half-million ringgit home theatre system comprising a pair of BeoLab 5 speakers, two pairs of BeoLab 3 and the BeoLab 7-2 used as centre speaker. All these are active and, of course, Ice Powered.
These speakers are connected to a BeoSystem 3, which is the control hub. Playing the CDs and DVDs is the BeoCenter 2.
The listening room has lights dimmed by the Lutron system which can be controlled by the B & O remote control and the 50-inch full HD plasma TV is also made by B & O.
The system can be configured into a two-channel system for serious listening.
The top-of-the-range BeoLab 5 speakers, which cost RM120,000 a pair, are styled like cones with the sharp ends chopped off for the bass units, and above the bass chamber are two disc-like contraptions for the mid and treble. These discs are the so-called Acoustic Lens which are supposed to spread the sound horizontally from the up-firing midrange unit and tweeter so that the sweet spot is widened significantly.
While not omni-directional, the Acoustic Lens does create a large soundstage and listening position is not so critical.
The BeoLab 5 has 2,500 watts of Ice Power - 1,000 watts for lower bass, 1,000 watts for upper bass, 250 watts for the midrange and another 250 watts for the treble.
Danny Cheong said most people buy the the BeoLab 9 which has 700 watts of Ice Power and the iconic BeoLab 8000 which look like pencils standing on their sharp points.
The BeoLab 8000 is normally paired with the BeoSound 9000 which is a CD player that can house six CDs. It can be fastened to a wall vertically or horizontally or you can fix it to its own stand vertically. 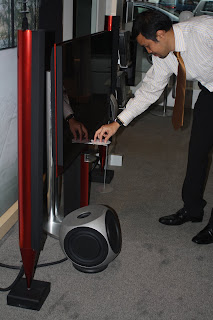 The slender objects that look like pencils standing
on their sharp ends are the BeoLab 8000 speakers. 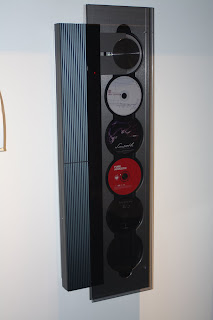 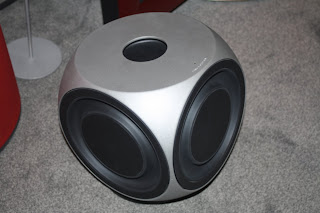 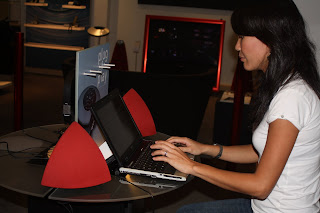 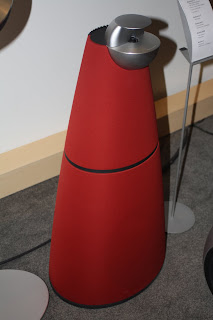 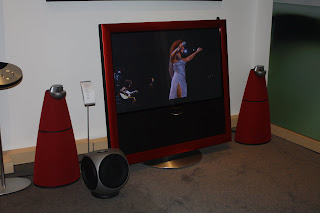 BeoLab 9 speakers, BeoLab 2 sub-woofer and the
BeoVision 9 50-inch plasma TV with motorised stand.
There is also a BeoLab 4 for computers, but you will have to fork out RM5,000 for them.
In terms of design, Bang & Olufsen from Denmark is up there with the best that Scandinavian designers can offer. In terms of technology, Jeff Rowland and Bel Canto couldn't have made a mistake selecting the Ice Power for their Class D amps.
In terms of pricing, well, these are upmarket components for (as Mae put it) those who appreciate the finer things in life.
In terms of sound quality...well, audiophiles should stop rolling their eyes and head to Bangsar Village and find out for themselves.
Email Post
Labels: bang and olufsen beolab beosound beovision ice power