Stello? Okay I must admit that I was a bit biased when I heard about stereo components by Stello. It is a South Korean brand made by a company called April Music and, come on, South Koreans don't make good stereo systems. Handphones and LCD TVs, yes; cd players and amps, no.


And thus I began reviewing the Stello CDT 100 CD transport and the matching DA 100 Signature DAC with my mind as open as it could possibly be.


You have to remove the perspex cover which has a knob and then take out the magnetic puck before placing a CD on the motor. 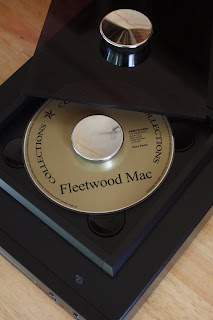 After placing the puck and closing the compartment (the transport plays even if the cover is not fitted on), you have to press the 'Disc' button so that it will read the CD's TOC and duration of songs.


A peculiar thing about this transport is that you have to press the button each time you play a new CD.


An attractive feature is the inclusion of an I2S output, but since there is no standard termination in the industry, Stello used a mini DIN connector which matches the input in the DA 100 Signature DAC. It cannot be used with other components with I2S inputs; there are not very many of them in the market anyway,


It is unfortunate that there is no standard way to connect the I2S signal. PS Audio, for example, uses the HDMI cable for the I2S signal in its PerfectWave transport.


I2S has been around for a long time, but it was not implemented by most manufacturers due to its higher costs. What it does is to separate the word clock, bit clock, master clock and data signals instead of transmitting all the signals in one cable like what the ubiquitous S/PDIF does.


The Stello CDT 100 features three digital S/PDIF outputs, each with isolation pulse transformers. These outputs are coax, AES/EBU and toslink.


The Stello CDT 100 is designed to be placed on top of the matching Stello DA 100 Signature DAC - that's why its feet are small rubber thingeys which do not isolate it very well. 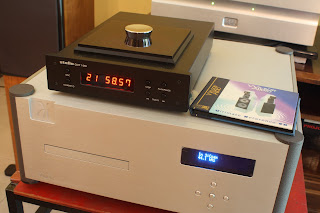 Initially I placed it on top of the Wadia 381i CD player since I was using it as transport feeding the Wadia's DAC section. The Wadia's case is made of thick aluminium and is heavy; so I thought it would be okay to have the transport on top of it.


Connected this way, the Stello created a very transparent, clear, open and lightweight sound. The bass was there, but lacked some heft.


Though the Stello performed quite well, it was the synergy of the Wadia's own transport and its DAC that created the so-called 'Wadia sound' of transparency and pinpoint imaging.


Then I connected the Stello transport to the resident Benchmark DAC1 Pre feeding a Bryston 4B SST power amp driving a pair of ATC SCM40s.


The Stello sonic signature was all too apparent - transparency, clarity, spaciousness and a somewhat lightweight tonal balance.


Having read somewhere that the Stello CDT 100 transport benefited from having Vibrapods placed under it, I fashioned a DIY isolation platform using a piece of plywood sitting on footers made of cork, rubber and earthquake pads (see http://hi-fi-avenue.blogspot.com/2010/02/rm5-tweak.html). The sound improved - the bass was stronger and the tonal balance became less lightweight.


If you buy a Stello CDT 100 transport , it is advisable to invest in a good isolation platform or vibration-absorbing footers.

A quick comparison with the CEC 3300 (not the belt-driven model) transport showed the CEC to sound thicker and less transparent but with a bassier tonal balance.

Retailing at RM3,300, the Stello CDT 100 is an affordable way to have a taste of high-quality sound and you can rest assured that its Sanyo mechanism will not be obsolete in the near future. I played all sorts of CDs and a few CD-Rs and the Stello read all of them.


And if you so desire, you can go all the way and buy all four matching Stello 100 series components - the transport, DAC, headphone amp/preamp and 50-watt power amp.