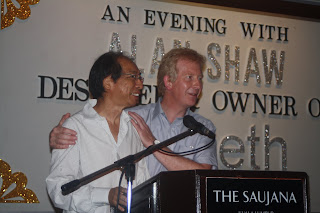 In a hot tropical country like Malaysia, it is best for an audiophile to switch on the air-conditioner to cool down the room an hour before listening to music.
This piece of advice comes from Alan Shaw, owner and designer of Harbeth speakers, who said the issue of heat affecting sound quality of speakers has not been investigated sufficiently by the industry.
"The main thing affected by heat is the surround which is made of rubber. When the ambient temperature is hotter, the rubber becomes more compliant and the cone excursions are greater.


"So there will be more bass produced by a speaker in a hot country like Malaysia and audiophiles may complain that it sounds boomy.
"Also, when the temperature rises the cone material becomes closer to its liquid state and the molecules slide against each other which causes heat. When the sound wave travels along the cone, some of it may be lost due to this and the sound may have less details in the mid-range," said Alan, who was in Kuala Lumpur for a short visit.
Thus if an audiophile in a hot tropical country wants the best sound, he should turn on the air-con an hour before listening to music because it takes some time for the surround and cone to cool down.
Harbeth's distributor in Malaysia, Sam Chan of Tropical Audio, organised a gathering attended by about  100 fans of the British loudspeaker manufacturer at Saujana resort in Petaling Jaya on Tuesday night during which Alan spoke on his company, its products and design concepts. He also took questions from the floor. 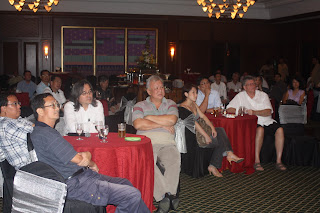 Harbeth fans who attended Alan's talk.
Alan said speaker designers in the West generally take measurements at the ambient temperature in their labs which is around 20 degrees Celcius.
"But someone in Beijing with the air conditioning turned off in summer due to the official policy of reducing peak usage can be listening to music at 30 degrees Celcius," he said.
In such a situation, the sound quality would be affected as the surround becomes more compliant, the cone material deforms and the voice coil heats up and changes impedence. All these will change the Q of the speaker and even port resonances of bass reflex speakers will be affected.
"The only constant is the mass of the cone," Alan said.
In other words, the sonic signature of speakers in hot countries would be different from that heard by the designer when he tested it in his lab in a temperate country.
Alan said manufacturers have to decide whether to make different products to suit the conditions of different markets.
He said he did some research and found out that the average ambient temperature of listening rooms around the world was 25.5 degrees Celcius.
He has now made it a rule in Harbeth to measure a speaker unit's Thiele and Small parameters at 24 degrees Celcius.
"I put the speaker unit in a cabinet and heat it up before making the measurements," he said.


When it is hotter, the Fs (free air resonance) is lower.
Harbeth is believed to be the only speaker manufacturer in the world that takes into account the effect of ambient temperature on speaker performance. 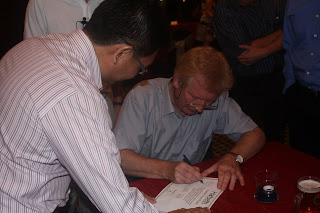 A Harbeth fan getting Alan's autograph.
Alan has strong views on other issues too such as bi-wiring - he does not believe in it and the newer Harbeths do not have bi-wireable terminals.
"The older models have them solely due to market demand," he said.
Alan opined that the biwiring craze started because people needed to do some tweaking since playing the CD required them to do nothing unlike when they used the turntable and they could tweak the anti-skating, shoot anti-static guns, change cartridges or tracking weight.
Since he does not believe in bi-wiring it follows that he does not believe in bi-amping too.


"It's a question of the amps having the same frequency response and gain. Once I wanted to test a component with four amps and I tested the amps. They had similar frequency response but the gain differed by about 1dB, so that would change the sound if the amps were used for bi-amping," he said.
Alan said Harbeth speakers have thin-walled cabinets because BBC engineers discovered during the change from mono to stereo that smaller thin-walled boxes with bitumen damping could be used to reproduce reasonably good bass, neutral mids and highs.
The thin walls vibrated and in effect were 'woofers' and augmented the bass frequencies and added a warm bloom to the sound. These worked very well for BBC broadcast monitoring work which was normally done at around 85dB which was about the same level as home listening.
"However, the thin-walled cabinets were not good for rock 'n' roll and electric guitars," he added.
On whether Harbeth would produce a floorstander, Alan said floorstanders have different design parameters from bookshelf speakers in terms of sound dispersion and also the workbenches in the factory are optimised for making bookshelf speakers.
"Production is running at full capacity at the moment and there is no way the factory can cope with making a new model, even a bookshelf one," he said.
Alan added that the industry is dying and in order to get the iPod generation to invest in good sound, there have to be fewer impediments - like debates over bi-wiring - to encourage them to step into a hi-fi shop.
Email Post
Labels: alan shaw harbeth sam chan tropical audio