There I was browsing around in IOI Mall in Puchong on Thursday when I popped into Daiso, the huge Japanese budget chain-store, and spotted a blue gel thingy.
It was a "shock absorbable pad" widely used by the Japanese to prevent furniture, fridges, TVs, computers, cupboards, boxes, etc, from toppling over during earthquakes by absorbing the vibrations caused by tremors. Japan is an earthquake-prone nation and the Japanese know a thing or two about  reducing damage caused by tremors. 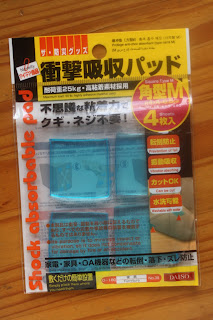 The packet of blue gel pads

These pads are made of some kind of elastomer resin which looks and feels like Scholl gel heel cushions. Since these pads are designed to absorb vibrations, I thought I could use them as a hi-fi tweak.


And they cost only RM5 (US$1 = RM3.50) for a packet of four square pads measuring 4cm by 4cm and 5mm thick. Each pad can take a maximum load of 25kg and can be used for up to five years, so if the pads don't work, I will not lose much money plus I will have hi-fi components that can survive earthquakes.

At home, I placed them beneath the feet of my Rega Planar 3 turntable.


There was some improvement in sound quality - the upper mid and high notes were less jarring, the sound was generally cleaner, the bass was a bit clearer and images more well defined.


Not bad for RM5. But the downside is that if you knock the turntable sideways, it will jiggle for two or three seconds before becoming stationary and if you hit the side of the plinth hard enough, the stylus will skip.


However, the pads do clean up the sound and the improvement IMHO is worth more than RM5 - just don't knock the plinth.


My next project would be to buy a sheet of laminated glass, use the pads as feet and place the Rega turntable on the isolation platform. 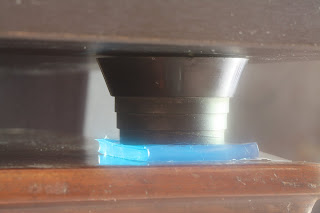 Picture shows a foot of the
Rega Planar 3 placed on a gel pad.

Next I placed the "earthquake" pads under the feet of the CEC CD player. The music sounded cleaner and more micro details were revealed.


I was playing a Barbra Stresand CD and I thought I could hear her breathing more clearly.