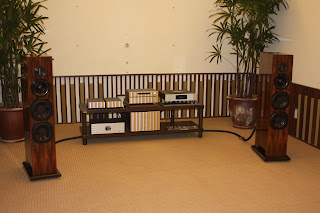 
The old technology is in the form of the legendary ATC SM 75-150s soft dome midrange driver which was introduced in 1976 and has become famed as the best midrange unit extant. 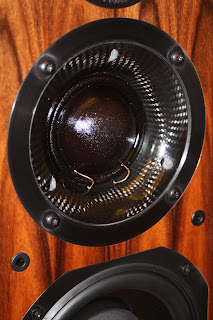 Note the carbon fibre horn of
the ATC soft dome mid unit.
From the best of the British are the ATC, Volt (a bass driver specialist) that assembled ProAc's carbon fibre bass drivers and the great traditional English way of making speaker boxes using HDF for density and bitumen sheets for damping. Add to the list the great British BBC-inspired tradition of natural-sounding vocals.


Doing the Chinese proud is the ribbon tweeter which is made in Taiwan. Who would have thought that a Chinese-made tweeter would one day be used by a respected high-end British speaker manufacturer? Business has gone global, after all, and the rise of China as an economic powerhouse has also resulted in a wide range of Chinese-made audiophile products flooding the market. 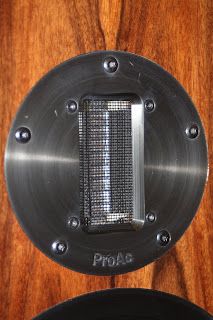 For the record, ProAc is not the only speaker maker to use carbon fibre - Wilson Benesch, Magico and Eggleston have already used the hitech material. 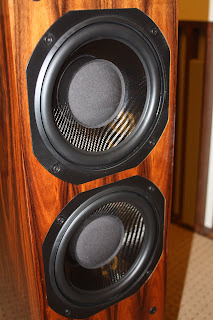 But ProAc maintains that theirs is unique. In its website, ProAc states: "Loudspeaker companies have toyed with the use of carbon fibre in loudspeakers, mainly for the use in cabinets. Carbon fibre coned drive units are rarely seen and used, we believe the type of carbon fibre and its preparation that we are  using is unique.


"Its incredible stiffness makes it ideal for a drive unit cone, and its piston like  qualities are perfect for moving air at low frequencies without distortion.


"The carbon cone is unique with a pure polymer impregnated carbon weave and polished diaphragm, the back of the cone is then specially lacquered and finally it is concentrically weighted to add appropriate mass."


The ProAc Carbon Pro Eight has a down-firing port aimed at the carbon composite plinth with slits at the side panels similar to the ProAc models from the D28 to the D100. Cones instead of spikes are supplied with the Pro 8 speakers. 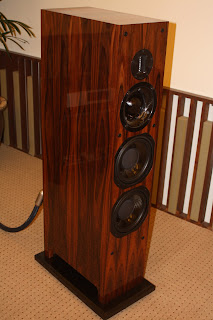 The speakers come with an attractive glossy finish
At the CMY showroom in Damansara Utama, the flagship ProAc speakers were driven by the Jeff Rowland Criterion preamp, Jeff Rowland Power 312, and the French-made Metronome Technologie CD 5 player. The speaker cables were Siltech Emperor Crowns, which cost as much as the ProAcs, while interconnects were Acoustic System LiveLine and Siltech SQ110. Power cords were Siltech Ruby Hill and the power supply was connected to an IsoGray system.


I had with me two CDs - Dire Straits' Brothers In Arms (xrcd version) and Susan Boyle's debut album I Dreamed A Dream.


Susan Boyle's CD was the first to be played. I had been listening to this CD quite a lot in the past week or so in my home rig and I was quite familiar with it.


The sound quality was seamless, clear, transparent and the highs were sweet and detailed, thanks to the ribbon tweeter that goes up to 30kHz. It wasn't overly sweet or too delicate like some other ribbon tweeters I have heard; it was robust enough to reproduce the crash of hi-hats hit at the rim, yet it was detailed enough to form images with some body.


The ATC dome mid had a sparklingly clear quality which did not seem too etched out or artificial while the carbon fibre woofers were fast and tight. Making a ribbon tweeter to work seamlessly with a dome or cone driver has always been problematic, but in ProAc's case the problem did not seem to arise at all. 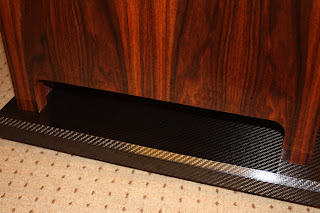 The carbon composite plinth
While playing Silent Night on Susan Boyle's CD, the bass went quite low and I felt some vibrations - the Carbon Pro Eights are rated to go down to 20Hz.


After listening for an hour or so, one word popped into my mind: purity. There was a purity of tone and timbre. Piano, saxophone, strings, vocals, everything sounded pure.


Crescendoes were reproduced with great ease. I would rate this as one of the strong points of the speakers. Another would be their ability to recreate the scale of an orchestra and a chorus. The soundstaging was deeper and more vertical than it was wide and I feel the Pro Carbon Eights are best suited for classical music, but that does not mean it cannot rock.


When I played Dire Straits, there was a kind of finesse to the sound. There was pace and punch, but there was also a silk-like feel to the music quality. The ProAc Carbon Pro 8s were not rock powerhouses like the Eggleston Works Andra III - they did deliver the slam but the ProAcs felt a little out of place in such rough company.


In a way, the ProAcs were the reverse of the Eggleston Andra III - the latter were great when playing rock songs but lacked finesse to play classical while the ProAcs had the finesse for classical music, but lacked just that extra bit of growl and snarl for the grit and grime of rock and roll.


This is where the Pro Carbon Eights, which cost RM150k, are similar to the Magico V2 that I heard recently - the Magicos also lacked that bit of low-end growl.


Nevertheless, the ProAc Carbon Eights are with the Magicos in the list of best speakers I have heard this year.