ProAc's new flagship speakers will feature carbon-fibre cones - but they are not the first to use this light and stiff material.
Wilson Benesch has used it in its Torus sub-woofer (or what they call an Infrasonic Generator) while Magico uses carbon nanotubes in their cone construction.
David Amey of DNA Marketing, which markets ProAc speakers worldwide, was in town to meet up with John Yew of CMY Audio, ProAc's distributor in Malaysia.
Over lunch at Shangri-la in KL today, David revealed some details about the new top-of-the-range speakers.
Called ProAc Carbon Pro Eight, it will feature two carbon-fibre bass units, the famed ATC SM75-150S dome mid-range unit and a Taiwanese-made ribbon tweeter.
David said ProAc is located near where several F1 racing teams are based and there is a specialised carbon-fibre industry in the vicinity.
"It is a light, rigid and strong material which is ideal for woofers. It is lighter than paper and plastics. The carbon-fibre cones are made by a specialist factory and the entire woofer unit is then assembled by Volt," he said. Volt, just like ATC, is a famed British maker of speaker units. Volt's woofers are widely used in the pro industry.
The carbon-fibre cone sounded great and ProAc decided to replace the plastic horn of the ATC SM75-150S mid-range dome with carbon-fibre and it worked very well too.
David said they then decided to experiment some more as the reflectivity of carbon-fibre was different. When they replaced the MDF plinth with a carbon-fibre piece, the bass sounded vastly different.
"The bass was fast, detailed and had weight," said David.
With the carbon-fibre cones, the crossovers had to be modified to suit their different character. The ProAc Carbon Pro 8 has crossovers at 680Hz and 3,200Hz. 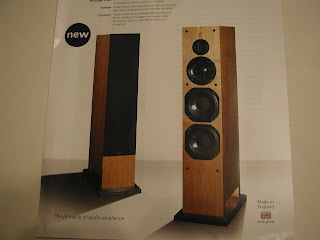 ProAc's new flagship speakers
The bass units are paralleled and its loading is similar to the D38 - the port fires downwards into a cavity between a plinth and the bottom panel and there are openings on the sidewalls for the bass waves to flow out.
It has a frequency response of 20Hz to 30kHz, a nominal impedence of 4Ohms and sensitivity of 91.5dB. It can be powered by amps from 10 to 500 watts.
The ProAc Carbon Pro Eight measures 123cm (49.2") high with spikes and plinth, 24cm (9.6") wide and 45cm (18") deep and weighs 68kg (146.9 lbs) each.
Other than the usage of hitech carbon-fibre, the rest of the ProAc Carbon Pro Eight is very traditional and exemplifies the best of British speaker-building.
The box is still made of MDF and the panels are damped with bitumen pads. That's as traditional as it gets.
According to David, the D100 will be discontinued while the other models in the existing Response range will still be made.
There are plans to make a smaller model with carbon-fibre cones, but nothing has been finalised yet.
David said ProAc's new direction is to do what it does best - making beautiful furniture that sounds good. It will be concentrating on stereo and getting out of AV.
ProAc will rationalise its AV product range and make only one centre channel speaker and one sub-woofer.
He added that he foresees a resurgence in stereo and a decline in CD players which will be replaced by Hard Disk players. The iPod generation will realise when they graduate to Hard Disk players that they need a decent system for the hires downloads and ripped copies of CDs to sound good.
Production of the Carbon Pro Eight will start next month and the first shipment will reach Malaysia by November.
John Yew said it will be priced at about RM150,000.