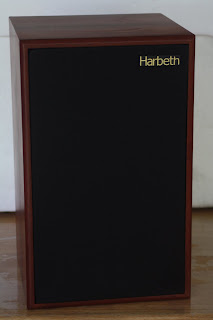 The Harbeth P3ESR comes from a respected family - it is a descendant of the Harbeth P3 and the BBC-designed LS3/5A.

Designed to be a mini-monitor, the Harbeth P3ESR is a small two-way sealed box speaker using a 110mm mid/bass cone and a 19mm ferrofluid-cooled tweeter. Its rated frequency response is 75Hz to 20kHz, but since it is a sealed box, the bass rolls off gently and there are 'hearable' low frequencies that don't exactly shake you, but makes the bass sound lower than the specs suggest.

Harbeth uses a thin-wall method of constructing the box and the panels are designed to vibrate and resonate with the back waves of the mid/bass speaker unit to enhance the bass output.

The mid/bass unit uses RADIAL2 which is a new cone material that was introduced in Harbeth's higher-end and larger speakers. 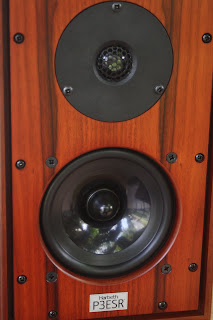 The P3ESR, which measures (h x w x d) 30.6cm x 18.9cm x 20.2cm, has an impedence of 6 Ohms and a sensitivity of only 83.5dB which is the least sensitive speaker I have ever tested. Harbeth claims any amp from 15 watts should suffice to drive the speakers but I found that they loved power.

There is only one set of binding posts  since the designer Alan Shaw does not believe in biwiring. Worthy of note is that the speakers come in matched pairs and the company logo on the top left corner of the grille means it is the left speaker. The grille itself is well designed and fits into a slot around the perimeter of the baffle. This design ensures that there is no diffraction of sound waves by the sharp edges of grilles as is the case with many other speakers.

Harbeth recommends any type of stand around 24" tall and any kind of cable, preferably the 79-strand type, which suggests that the QED 79 strand cable should be a good match.

As I said in the previous post Sam Chan of Tropical Audio handed over to me rare Quad speaker cables and interconnects and lightweight open-frame steel stands.

First I will deal with the Quad wires - I found that the Quad interconnects emphasised sibilance while the speaker cables were quite good in creating a deep soundstage.

Thus the Harbeths excel at low to normal listening volumes with great clarity and a mild touch of warmth. Since the P3ESRs are small the bass won't move you physically but it is not exactly lacking - there is enough mid and upper bass (plus augmentation from the vibrating box) to give the music some body.

The treble is bit smooth and seems mildly rolled off even though cymbals and other high-frequency sounds can be heard. Perhaps the smoothness makes it seem as if the treble is a little dim even though the highs and mids are impressively transparent.

Since it is a BBC-inspired design the midrange is excellent and voices are rendered very well. This aspect of the Harbeth is its selling point.

Harbeth makes speakers that you either love or hate - its detractors say they sound too warm and British while its fans say they sound natural and pleasant. Whatever the case may be, there's no denying that Harbeth has a huge and loyal fanbase.


I was rather surprised that the type of speaker stand could change the sound that much. Alan Shaw is clearly mistaken - not just any old stand will do. You will have to test a few designs to find one that suits your taste.

My stands are made of steel and has four pillars. They are heavy and I use cork footers and Dynamat damping sheet on them. 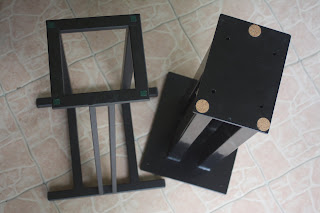 Light open-frame vs heavy speaker
stand (note the cork footers).
With my heavy stands the Harbeth P3ESRs sounded bassy - the bass went lower and clearer at the expense of mid and treble transparency. This was great for rock songs and when the volume was turned up I could get the Harbeths to sound as loud as an indie band playing in a club with pretty tight bass and good pace.

However when I placed them on the light open-frame stands the tonal balance shifted and the P3ESRs sounded less bassy and more transparent with a bit more details, so you will have to experiment a bit to find the right balance of bass and transparency.


After replacing the sibilant Quad interconnects with my resident Audioquest Panther dbs XLRs I decided to do the unthinkable (for an Englishman, that is) - I used an entire set of American MIT cables. With the MIT CVT Terminator 2 interconnects and speaker cables it was quickly evident that the British are far behind the Americans in cable technology.

The MITs improved the stereo imaging, cleaned up the bass and increased separation. Again Alan Shaw is wrong - not just QED 79s should be used with his Harbeths. You can use any cable - even American ones - despite the average Englishman or anglophile's disdain for things across the Atlantic.

Harbeth claims that any amp from 15 watts should be enough. I listened to the P3ESRs on the resident system comprising CEC 3300 (used as transport), Benchmark DAC1 Pre, Bryston 4B SST and ATC SCM40 floorstanders.

Since I had a Sugden 45 watt power amp lying around, I gave that a go. Sure, the Sugden could drive the 83.5dB sensitivity speakers and the resulting sound was rather British, but the neutrality, poise and control of the 300-watter Bryston took the Harbeth's performance to another level especially in the detail and extension of the bass and separation of images.

The P3ESRs love power - perhaps a 100-watter should be the minimum.


In the wee hours of the morning...


Though the Harbeth P3ESRs can be used for playing rock at high volume, they sound outstanding when playing light jazz of the Diana Krall genre reasonably loud. Singers like Susan Boyle and Barbra Streisand will have their fabulous voices rendered naturally and clearly by the Harbeths.

With uncluttered, undemanding and less complex music, they sound fabulous.

In the wee hours of the morning with a well-recorded CD like the Audiophile Female Voices playing, the Harbeths can make the experience memorable - its warm and cosy sound kind of wraps around you like a comforting blanket.

I think that's why Harbeth has such a big group of loyal followers.