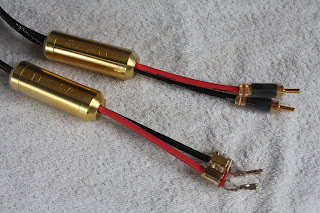 high-quality WBT terminations. Whether the cylinders

have any function other than cosmetic

purposes is not known.

When I saw the Xindak FS-Gold speaker cables at the KL International AV show on static display, I thought it would be a good idea to compare them with the Goertz MI 2 speaker cables that I own.
This is because both of them are made the same way - two ribbon conductors separated by a thin dielectric.
This technique has been advocated by none other than Allen Wright, author of the Super Cables Cook Book, who sells a silver ribbon version of this design on http://www.vacuumstate.com/
This way of making flat ribbon speaker cables and interconnects results in high capacitance and low inductance and some amps or output stages of CD players cannot cope with such loads.
However, it is supposed to negate the skin effect and solve the phase anomalies caused by it. In other words, signals of all frequencies are supposed to reach the amp or speaker at the same time.
This design is also supposed to produce good bass and unrestrained highs. 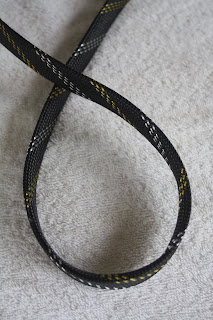 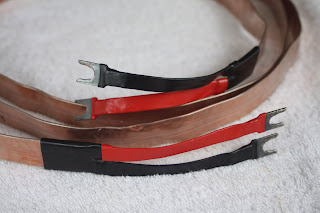 When Eddie Tan of Asia Sound Equipment Sdn Bhd in Amcorp Mall, PJ, offered the Xindak FS-Gold to me for review, I quickly accepted.
Using the resident system, I connected the made-in-China Xindak to the Bryston 3B SST and the ATC SCM40s.
The Xindak FS-Gold uses electrum foil about 3cm wide. The thickness is difficult to measure because it has an outer jacket, presumably Techflex, with silver and gold stripes. I reckon the foil would be around 1mm thick.
The cables are very well made and are fitted with WBT 0644 plugs for the amp connection and WBT pure copper spades for the speaker side.
Asia Sound is now selling them at a special price of RM3,350 for an eight-feet pair and they are not exactly cheap.
The conductor material is electrum, which is a naturally-occuring alloy of silver and gold and the composition varies according to where it is mined.
So the exact composition of the electrum that Xindak uses is not known. Also not known is the function of the 9cm long by 3.5cm diameter brass-like cylinder attached to both ends of each cable.
The Goertz uses high-purity 10 AWG copper foils and pure silver spades.
Since the designs are similar, the listening tests would focus on the sonic signatures of the metals used.
The first thing I noted when I used the Goertz with the Bryston was that the images were not "fattened" as was the case when I used the Audiolab 8000S. With the Bryston, the size of the images was natural which suggests that the Audiolab could not cope with the high-capacitance design very well.
Both the Xindak and Goertz revealed the advantages of this flat ribbon design - the soundstage was big, wide and spacious. There was great transparency and a lot of detail but I felt the Xindak had a slightly lower noise floor.
Bass was rendered in a strong manner and the highs were unrestrained.
The main differences were in the tonal balance and rendition of leading edges of music.
With the Xindak, the tonal balance was warmer (which some audiophiles have said is the sound of gold) and slightly valve-like. The leading edges of metallic instruments like horns, cymbals and electric guitar were rounded off and rendered smoother. Thus the metallic overtones of, say, Miles Davis' trumpet are less sharp and have less bite.
With the Goertz, it is the sound of copper that we are all familiar with - the sound can be cold and analytical with leading edges that sound sharp and with the right amount of dynamics.
In my view, the sound of copper is more realistic while the sound of gold (or electrum in Xindak's case) is more relaxing.
Which is better? It depends on what you want.
Email Post