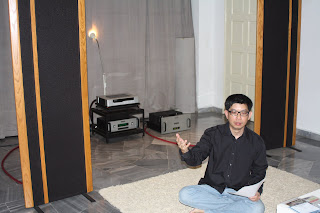 Leslie Loh sitting in front of his beloved

Maggies elaborating on his mission. 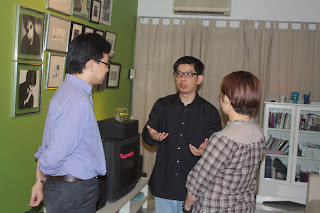 some of the reporters in his house.


Leslie Loh, aka maggielurva in hi-fi circles, is a young man in a hurry. He wants to prove a point - that a Malaysian producer can come up with a world-class audiophile CD.
He has done an audiophile CD before - 2V1G - which was quite well received.
His second effort, Love's Tapestry, is more ambitious - he roped in renowned and versatile guitarist Roger Wang and Malaysia-based Filipino singer Gina Panizales who is no stranger to the cool crowd in KL/PJ.
The songs are love tracks from the 1970s and 1980s - Just Tell Me You Love Me, Just Once, Still, I Won't Last A Day Without You,  I Will Never Love This Way Again, I Honestly Love You and others.
It took him three months in the studio to finish recording the album with the help of another audiophile, Joseph Ki.
Aiming for high standards, they settled on top-end equipment like the Neve analogue mixing console and AKG microphones, and to ensure that he could get the type of sound he loved, Leslie brought along his top-notch Stage III silver/pallladium interconnects.from his home rig.
And he flew in Doug Sax from The Mastering Lab to do the mastering.
On Wednesday (Dec 16) he invited some journalists and music dealers to his Bandar Utama home for an informal launch.
A few days earlier, he had held another launch at CMY Damansara Utama for audiophiles and music lovers.
In his cosy house, Leslie talked about his dream to have a world-class audiophile CD for the global market and his aim to reach out to younger music lovers through well-recorded pop songs.
"Next year, we plan to have four CDs out," he said. Work on a jazz CD has already begun.
Released under his poppopmusic label, Love's Tapestry is pressed in Hong Kong and will be distributed in Malaysia and Singapore by Interglobal Music (Malaysia) Sdn Bhd. 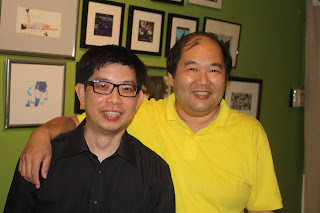