This is the first time that I have to do a two-part review of a product. It is simply because the Benchmark DAC1 PRE is such a Swiss army-knife kind of component that including every detail in one article would make it too long.


Retailing at RM6,500, the Benchmark is actually not expensive considering what it can do.


> It is a high-quality preamp.
> It is an excellent headphone amp.
> It is a top-flight DAC that supports 24bit 96KHz data stream through its USB input.
> It can turn your decent CD player into a turbo-charged system.
> It can turn your laptop into a good-sounding music player.
> It enables you to listen to all the hires downloads available on the Internet.
> It enables you to listen to all the Internet radio stations out there in the cyber world.
> It ensures that your CD-based system does not become obsolete as it can act as the DAC for your CD player as well as play rips and music downloads from your computer plus streaming music from the Internet.
> You can also connect your ol' skool turntable to it via the analogue input (you need a phono preamp) and spin some vinyl. 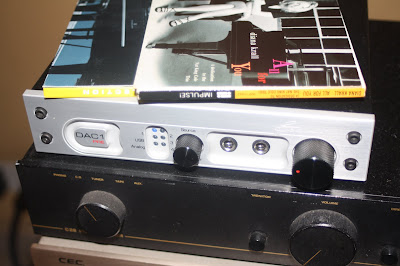 The Benchmark DAC1 Pre is about
half the size of a normal component.

The Benchmark DAC1 Pre is actually the DAC1, released some years back, with an analogue output plus volume control. According to reviews done by audiophiles who own the DAC1, the DAC1 Pre sounds better - Benchmark must have improved its famed DAC1.


The heart of the component is a 24-bit 192-kHz Analog Devices AD1853 DAC chip around which Benchmark has created proprietary software and hardware solutions.


One of them is Benchmark’s UltraLock clock system which achieves high immunity to jitter even under extreme conditions. UltraLock will block more then 12.5 UI of jitter (@ 1 kHz). With the UltraLock clock system, the D/A conversion-clock in the DAC1 PRE is totally isolated from the clock of the digital audio source. Benchmark claims its UltraLoc clock system outperforms most well-designed two-stage Phase-locked loop designs.


Another proprietary system is the AdvancedUSB Audio Technology which supports 24-bit audio at sample rates of 44.1, 48, 88.2 and 96 kHz without having to install any drivers or other software. AdvancedUSB responds automatically to sample-rate changes to bypass the computer's operating system’s sample-rate conversion. Benchmark offers a true plug-and-play USB DAC that is compatible with Windows 7/Vista/XP/2000 and Mac OS X and the performance of the USB input is equal to that of the other inputs.


Benchmark says "it is very important to have a 24-bit USB path, even for 16-bit playback, because digital volume controls and other DSP function s can increase 16-bit audio to 24 bits. If a 16-bit USB DAC is used, up to 8 bits of each digital audio sample will be truncated resulting in significant, non-musical digital distortion at audible levels."


Its headphone jacks are (there are two and the one at the left mutes the speakers; that function can be disabled) driven by Benchmark's HPA2 high-current, 0-Ohm headphone amplifier which will deliver the full rated performance of the DAC1 to the headphones even when two pairs are used. The gain can be adjusted to suit the sensitivity of different headphones.


The preamp section features high-current National LM 4562 operational amplifiers that are capable of driving 300-Ohm loads and are suited for driving long or high-capacitance cables (the RCA outputs can drive cables as long as 1,360 feet!). The volume control has a textured knob which has a very reassuring feel about it and features 41 clicks.


The output section includes stereo XLR balanced and RCA unbalanced. Output of the XLR balance can be adjusted. In 'calibrated' mode, trim-pots control the gain of both XLR and RCA outputs.


A 55-page manual (that looks like a scientific document with test-result graphs and charts) is included and reading it with all the instructions and do's and don'ts is like preparing to set up a highly-sensitive and sophisticated piece of equipment for the lab.


Frankly, the Benchmark DAC1 Pre is indeed a sophisticated piece of hitech equipment.
When I brought it home from Tong Lee a few weeks ago, my wife said: "Wah, so small."