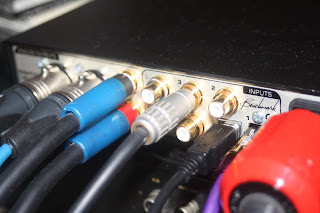 I started off by testing the Benchmark DAC1 Pre's headphone amp.

Recently, when I tested the headphone jack of the Bryston BP-6 preamp (http://hi-fi-avenue.blogspot.com/2009/12/brystons-synergy.html) I felt it sounded too lean. The Benchmark's headphone jack sounded less rich than the CEC 3300's but not as lean as the Bryston's with my pair of Sennheiser HD600.


The high frequencies were more extended with the Benchmark than with the CEC without sounding hard and bright. The bass was tight and deep and the tonal balance was neutral.


It quickly dawned on me that it was one of the best headphone amps I have ever tried.


Compared with the very rich-sounding Sugden c28 preamp that I had been using for the past year or so, the Benchmark DAC1 Pre sounded slightly leaner, though not as lean as the Bryston BP-6 preamp, and had just as much pace and drive as the Bryston.


There was a kind of synergy between the the Bryston BP-6 and the Bryston 3B SST power when I tested them late last year and together, they sounded punchier and pacier than the 3B SST paired with the Sugden preamp.


With the Benchmark DAC1 Pre and the Bryston 4B SST that I am using now to drive a pair of ATC SCM40s, much of that 'Bryston synergy' was apparent while the Benchmark provided a dash of smoothness despite sounding very analytical.


The Benchmark seemed fussy about power cords - when I used a Supra LoRad, the Benchmark sounded 'brightish', thin, very 'digital' and detailed.


But when I used an Oyaide Tunami power cord known for its creamy midrange, the Benchmark sounded smoother and slightly warmer while retaining its analytical character. The Oyaide Tunami was used for the rest of the tests.


If you buy a Benchmark, the first thing to do is to get a warm and rich sounding power cord.


The Benchmark was connected to the Bryston 4B SST via the balanced connections using an XLR interconnect comprising Neutrik plugs and Gotham cable.


The CEC was easily outclassed.


Next I hooked up the resident MF A3-24 DAC which was highly praised by Stereophile some years back. Using the MIT coax and plugging it alternately to the MF A3-24 and the Benchmark, I listened hard for differences. A pair of Rega Couple interconnects were used to link the MF DAC to the analogue inputs of the Benchmark.


With upsampling set at 96kHz, the Musical Fidelity A3-24 DAC was clearly the loser with the highs sounding closed in and dimmer and the music generally muddier.


Surprisingly, the MF DAC set at 192kHz upsampling could hold its own against the Benchmark for a wide range of the frequency band. It was only at the high frequencies that the Benchmark DAC1 Pre sounded more extended, spacious and airier.


Also, when playing complex and thickly-layered music, the Benchmark could separate the musicians and singers better and the music sounded cleaner with better imaging.


CEC and Wadia as transports


Bear in mind that I am using the cheaper CEC 3300 CD player which is not belt driven, so the comparison can be deemed unfair. But Benchmark claims its Ultralock system works so well that any old CD player can be used as transport.


With the CEC 3300 CD player as transport, the sound quality was much better than the 3300 used as CD player which meant that Benchmark’s Ultralock system worked even with budget and old components.


However, when I used a Wadia 381i as transport, there was an increase in smoothness and detail of the sound. The soundstage was also larger. It just goes to show that despite what Benchmark claims, a better transport does result in better sound.


With the XLR interconnects, I noticed immediately that the music sounded softer and I had to turn the volume up to make music through the XLR outputs sound as loud as that through the RCA outputs.


Despite the equalisation of volume, I noted a loss of dynamics, punch and pace which was not expected of balanced connections. Frankly it was the first time I had connected a preamp to my Bryston 4B SST with balanced interconnects and I had to call an audiophile friend to find out what was going on. He confirmed that whenever he used balanced connectors in his system, the sound would have more slam, greater dynamic range, lower noise floor and more clarity.


So it was back to reading the 55-page Benchmark instruction manual. I found out that the balanced outputs have passive attenuators that control output levels and have settings at 0dB, 10dB, 20dB and 30dB. The output impedence changes with the setting – at 0dB, the output impedence is 60 Ohms while at the factory-set level of 20dB, it is 135 Ohms.


I also googled and read about a reviewer saying that the Benchmark DAC1 Pre started singing as well as his reference after he had set the output level to 0dB.


And so I unscrewed the casing and changed the XLR output setting to 0dB and played some music again.


Immediately I noticed the differences. The sound was very dynamic, punchy and detailed with great bass slam. The noise floor was also lowered. If you buy the Benchmark DAC1 Pre, the first thing to do is to set the XLR output level to 0dB and buy a good pair of XLR interconnects if you want to the exploit this midget-sized unit to its maximum.


However, you will need to turn the volume down when the XLR output level is set at 0dB. When I used the single-ended interconnects, the volume knob was at around 12 o’clock for normal listening levels. With the XLR setting at 0dB, it was loud enough at around 9 to 10 o’clock and bear in mind the ATC SCM40 floorstanders are 85dB in sensitivity.


Last week, I upgraded to a pair of Audioquest Panther dbs (24v) XLR interconnects and my system has been singing ever since. 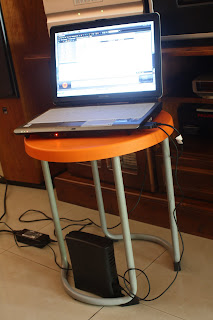 The way of the future: a laptop streaming
music files through a USB input.
Note the Buffalo 1TB external drive on the floor.


There are quite a few DACs and even CD players which offer USB inputs these days in keeping with the trend. But not all of them boast of being able to support 24bit 96kHz data streams.


A normal USB cable comes with the Benchmark and it is a simple matter of just plugging and playing, thanks to the software solutions programmed in the Benchmark.


Much has been written about the problems with computer hi-fi systems since music players can be affected by the computer’s operating systems (OS). For example, Microsoft XP is notorious for its digital mixer called Kmixer which can degrade data streams. By default all audio streams go though the Kmixer to reach native USB audio devices. The fix, according to several websites, is to download the ASIO4ALL driver which by-passes the Kmixer.


However, Benchmark states that it has investigated this issue thoroughly and has found that the Kmixer can perform with full bit transparency under correct conditions. It dedicates three pages in its manual to explain the issues of OS, Kmixer and ASIO.


After being reassured by that, I plugged the Toshiba Tecra laptop with Centrino Duo chip and Microsoft XP OS to the Benchmark with the supplied USB cable. My music files are stored in a Buffalo 1TB Drive Station with TurboUSB to increase data transfer speed and this was plugged to the laptop via another USB input.


I launched Monkey Media and started playing from the Buffalo external hard drive without having to download any software or configure settings. Indeed, the Benchmark offers plug-and-play convenience.


The MP3 files played without hitches, but when the FLAC files of Dire Straits' Brothers In Arms ripped with EAC from an xrcd edition of the CD was played, I could hear a few clicks and pops.

After about three songs, the music stopped for a few seconds and then continued playing. It was worse when the 24bit 88.2kHz studio master files of Handel's Messiah by Dunedin Consort that I downloaded from Linn Records ((http://hi-fi-avenue.blogspot.com/2009/09/my-first-hires-download.html) were played. After a few disruptions, I stopped the player and started googling for answers.


Apparently these disruptions are caused by data drop-outs which are quite common in computer hi-fi and I quickly learnt that playing huge music files can use more than 70 per cent of the processing power of the chip and I had to close all other functions while playing music, even the anti-virus software, to free the chip from performing other functions in the background.


So I searched around for functions to turn off and switched off the wi-fi. I started playing and after a few FLAC tracks, the music player stopped again.


The same thing happened when I used a thumbdrive. More googling revealed that the performance of USB inputs can drop when more than one USB component is plugged in at the same time and data may not be transferred fast enough.


Finally I copied the music files from the Buffalo external drive to the laptop and played from its internal hard disk. This solved the problem of data drop-outs and there were no more clicks or pops.


Finally I could hear the 24bit 88.2kHz files of Handel's Messiah in their full glory - they sounded  rich, full-bodied and natural.

Listening to MP3 followed by FLAC rips of 16-bit 44.1kHz CD tracks and 24-bit 88.2kHz files revealed what was missing in the MP3 files - the rich harmonics. MP3 files are stripped of this harmonic richness which make, for example, a good violin sound like a good violin.


The FLAC files of ripped CDs sounded smoother than the CDs themselves, especially the vocals. This has prompted some people to say that computer hi-fi can sound more 'analogue'. Music from CDs seemed to have slightly harder leading edges of vocals and instruments like horns and electric guitar.

I have an Aztech 802.11n wireless router upstairs and my Internet provider is Streamyx (1 Mbps speed).


The laptop was connected to the stereo system downstairs and with WinAmp, I listened to several Internet radio stations streamed wirelessly.


I listened mostly to jazz, classical and folk stations offering MP3 and Advanced Audio Coding (AAC) music files. AAC is the better-sounding format that is supposed to replace MP3.


When listening to Internet radio, data drop-outs will depend on the quality and speed of the link. When you get a good link, Internet radio can be a pleasure to listen to especially when there are hundreds of stations in cyber space offering music as diverse as Romanian folk and Chinese music from Malaysia's 988 FM station. It's quite refreshing to listen to something other than your favourite CDs.


The Toslink has always been criticised as the weakest of the digital links, but Benchmark claims that their Toslink input performs as well as the other digital inputs.


So I picked up a QED Performance Optical cable from CMY Audio In Damansara Utama, PJ, and fixed it to the Toslink inputs. The coax cable used was the MIT Terminator 3.


It was just a matter of turning the input knob and checking for differences. After a while, I concluded that there was none and I have decided to use the Toslink since it will not be affected by EMI/RFI.