Rega's uber turntable may be out this year

Looks like the 'Ultimate' Rega turntable may be launched by the end of this year.
On Feb 3 when I had a chat with Phil Freeman, who is effectively the CEO of Rega Research, he was reluctant to confirm whether the turntable he and Rega founder Roy Gandy were tinkering with would eventually be marketed.


However he did reveal some details of the design which I have already mentioned in my previous post.


Last night, I discovered more details about the uber turntable from another forum - http://www.pinkfishmedia.net/.


In a thread, a forumer called JazzDoc in a reply posted at 5.04pm (UK time) on Feb 3 said:
"I saw Roy this evening. The 'uber turntable' is in prototype form. From what Roy said about it, and we only spoke briefly, the materials used are key to the new turntable.


"The arm will be a modified and improved version of an existing design. Roy told me that the entire range of turntables will also be revamped using newly available materials. The high end turntable will arrive sometime in 2010 but a launch date is yet to be set." 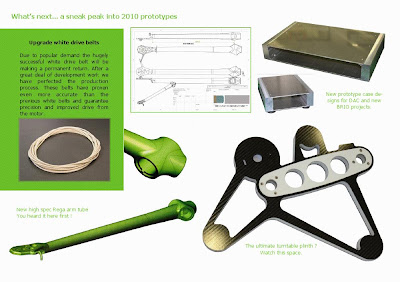 
Now we know that the tonearm will be an improved version of an existing design, possibly the RB1000.


There is no mention of the mat, so we can only make an educated guess that it would be made of felt.


Phil told me that it was quite difficult to find a manufacturer who could make the ceramic bearing housing and spindle.


Rega found one ceramic manufacturer who initially said the job could not be done, but later managed to do it and got it right in its first attempt. If it is not done correctly, it would break easily.


The tolerance is so tight that the gap between the spindle and bearing housing measures only two microns. Phil said a low-viscosity oil would be used to lubricate the bearing, which is a single point with round tip.


The cost? Nobody knows yet, but Phil said it would be "very expensive".


These are exciting times for Rega fans...