New Rega products on the way

An ISIS CD player with a valve output stage and a revised P1 turntable are among the new Rega products to be launched this year.
Phil Freeman, who is effectively the CEO of Rega Research, said Rega will also launch a DAC, which should cost 400 pounds.
"The new P1 will have a platter made of phenolic resin instead of MDF and it will also have a new tonearm. Plus the plinth will be improved," said Phil, who has worked with Rega founder Roy Gandy for 31 years,

Phil was in Kuala Lumpur, Malaysia, yesterday to meet the local Rega dealer, Eddie Tan of Asia Sound, and also Kim S Tay, Rega's head of marketing for Asia. At night, he was hosted to a sumptuous dinner with hi fi reviewers and bloggers. 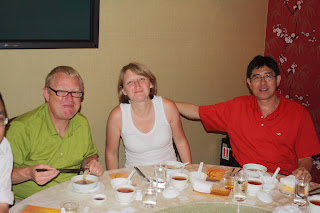 (From left) Phil Freeman, his wife Lin and Kim
tucking into a sumptuous pre-Chinese New Year dinner.
Phil said phenolic resin is a very stiff material which is quite low cost and works well as a platter.

"We haven't decided whether to give the tone arm a new name," he added.

Eddie Tan was quick to add that he has placed an order for an ISIS valve CD player.


On the so-called new tone arm which was featured in Rega's Christmas Magazine to dealers worldwide, Phil said Rega spent 50,000 pounds on a new tooling machine to replace its 25-year-old machine and the new model can make better arm tubes.


These new and improved arm tubes will be used in the tone arms of all models made from this year.


"With the new tooling machine, it is possible to make a new tone arm, but that is something for the next two years," he said.


As for the skeletal plinth that was also featured in the Christmas Magazine, Phil said it was a prototype that Roy Gandy and he are working on.


They are attempting to take Rega's turntable design to its zenith and the turntable, when both of them are satisfied with its sound quality, will be the ultimate Rega.


The unique feature of the prototype is the bearing housing and spindle which, unlike normal ones made of brass and steel, are made of ceramic.


"The bearing is single point with a round tip and the plinth is made of carbon fibre," Phil said. The sub-platter would be made of something light like high-quality aluminium or magnesium.alloy.


They are quite satisfied with its sound quality but it is still very much a work in progress, and more work needs to be done on it before they will even consider marketing it.
"It will be very, very expensive," he said.


Phil also pooh-poohed the belief that the secret to the Rega sound is that it spins faster than 33 1/3 rpm.


"Every Rega turntable is tested before being marketed  to spin accurately. The lower-end P1 may have wider variations in speed, but the high-end P9 spins very accurately," he said.


Having said that, he noted that music sounds better if the turntable spins slightly faster.


On mats, he said Rega's felt ones work very well as the fibres provide grip while dampening vibrations.


When asked to comment on the controversial subject of VTA (Roy Gandy is not a believer of VTA), Phil slapped his forehead and said,"Oh no!"


He said if you were to raise the arm by a relatively big margin, the difference in tracking angle of the stylus would be minimal.


VTA should be adjusted if the cartridge is so tall that its rear hits the vinyl.


"Any VTA adjuster would compromise the rigidity of the tonearm. That's why we recommend spacers to raise the tonearm," he said.


On spring suspensions, he said the design began many decades ago when turntables were included in one-box music centres that comprised an amplifier and radio.


These turntables could play a stack of records and each time a new record was played, it would drop with a thud and the spring suspension was designed to absorb the impact, he pointed out. 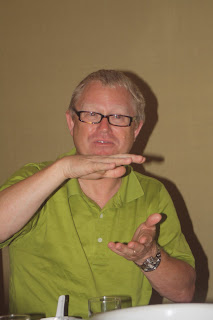 Just before everybody called it a night, Phil was asked about the future of the CD player given that Linn has stopped making CD players as of last December.


He agreed that the music industry is heading towards hires downloads and solid-state drives, but he is convinced that turntables won't die off. But the CD player is more vulnerable because its sound quality is not at the same level as turntables and vinyl.


But what is scary is that the big manufacturers may one day decide to stop making laser diodes - currently only Sanyo still makes laser diodes for CD players - when content is no longer stored in optical disks but in solid-state drives.


If laser diodes are no longer produced, then that's the end of the CD player.


Even now, some companies are using transports which they had bought some time ago before the manufacturers stopped production of the transports.


"Some Philips transports are no longer made," he said.


Asked if there could be a Rega digital stream player in the future, he said: "That's a computer. No, we won't make one."