The magic of Magico 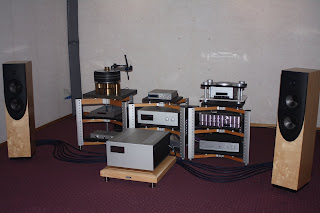 This is one of the best systems that I have ever heard
Whenever I use my Sennheiser HD600 headphones I hear things...lots of things that are missing when I listen to normal stereo systems. Things like echoes, reverbs, acoustics of the venue, shuffling of feet, licking of lips, clearing of throats, someone coughing in the audience...
Rarely have I come across a stereo system that can sound as detailed and transparent as the Sennheiser HD600 can.
Yesterday afternoon was one of those rare times when I heard a big rig that sounded like a giant pair of Sennheisers.
The sound was simply magical. I just sat at the sweet spot and soaked everything in for more than two hours.
The soundstage was so huge and wide that it seemed as if the entire listening room was transformed into a concert hall or recording studio.
There were times when the images stretched so out of the box horizontally that it seemed like some kind of sensurround experience.
It was one of those rare times when the speakers did a disappearing act. I closed my eyes and just moved to and was moved by the music - it seemed as if I was smack in the middle of the sea of sound. The notes flowed so naturally, so melodically and the images were so pinpoint sharp that the speakers did not seem to be there. I played rock, classical, solo cello, jazz, acoustic guitar and other tracks and they all sounded lifelike with extreme dynamics, natural bloom, right timbre, transparency and great delicacy.
By now you must be wondering what I am drooling over.
I was at Audio Image in Section 19, Petaling Jaya, listening to a pair of Magico V2s.These magical speakers were driven by some of the best components in the world - Nagra CDC CD player connected to a Soulution 721 preamp and a Soulution 710 power amplifier. Wires were inhouse makes designed by Adrian Wong including speaker cables that comprised three wires per run and I thought he had tri-wired the Magico V2s until I looked at the back of the speakers and saw that they had only one pair of connectors each. 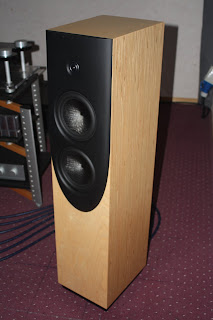 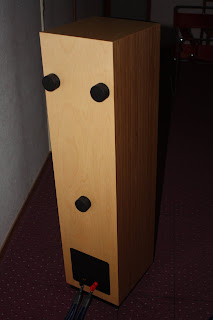 The three plugs are not pieces of foam
plugging up ports; they are aluminium
screws that can be tightened to tune the cabinet. 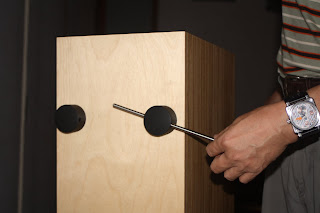 Tightening the aluminium plug with
a metal rod that comes with the speakers.
The Magico V2s are unique in many ways: the baffle is a solid piece of black anodized aircraft-grade aluminium with curved edges to reduce diffraction; there are three aluminium plugs at the rear attached to a tension-coupling frame which can be tightened by screwing in the plugs with a supplied rod to tune the 17-ply vertically stacked Baltic Birch cabinet; and there are two sets of spikes - the normal sharp pointed type and the other with ball-like ends to ensure that marble or tiled floors would not be scratched.
The Magico V2s, which cost as much as a Proton Waja, are entry-level products and they are 2.5-way speakers measuring 42" (105 cm) tall, 12"(30 cm) deep and 10" (25 cm) wide.
Frequency response is rated at 32Hz-40KHz, sensitivity at 89 db, impedance at 4 ohms and recommended power is 50-300 Watts.
You would need a friend to help you carry them as each weighs 120lbs (55 Kg).
The drivers consist of a 1" Mr_1 Ring Radiator tweeter (which looks like the ScanSpeak unit but is a proprietary design also used in the higher-range Model 5) and two 7" Nano-Tec woofers. 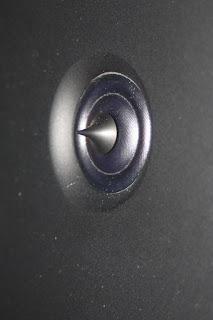 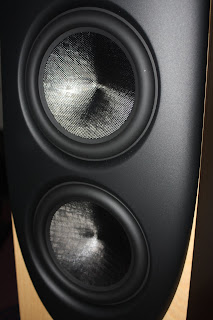 The Nano-Tec woofers made of carbon nanotubes.
These woofers deserve special mention because they are the first speaker units to use carbon nanotubes. The outer carbon skins are fused with Rohacell foam to create sandwich cones with the carbon material providing low mass and high tensile strength to act like perfect pistons while the foam damps cone resonances.
Elliptical Symmetry Crossovers are used and parts such as MCap, MCap-Supreme and MCap-Supreme Silver and Gold capacitors are sourced from Mundorf, the respected German company. Internal wiring uses 6N solid-core copper.
Using extremely high quality (and expensive) components plus innovative construction methods and cutting-edge technology have resulted in speakers that look and sound good.
I had gone to Audio Image with the HD Mastering CD that I had bought weeks ago and I had listed down the tracks that I wanted to listen to, but the system delivered such good sound that I played the entire CD.
I also played a few Eva Cassidy songs from her Time After Time CD and two tracks that I had downloaded from the Internet and burnt into a CD-R with MediaMonkey - one was a hires MP3 jazz number from Mapleshade and the other was a Studio Master 24-bit 88.2kHz FLAC file of Handel's Messiah from Linn Records. 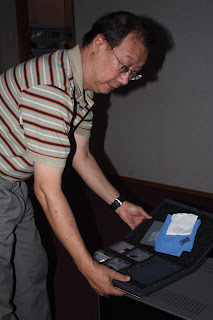 Adrian Wong with the tool
box that comes with the speakers.
Needless to say everything sounded really good. Just before I left, Adrian took out the digitally remastered Beatles CD set that he bought and played Abbey Road. That sounded great too.
It was a fruitful afternoon and I felt extremely satisfied when I left because I had heard one of the best systems ever. The Soulutions had been run in and sounded much better than they did when I first auditioned them a few months ago and this time there was no politeness in the treble that I had noted in the previous encounter. I think it was a combination of the pre/power amps having being run in and the fabulous speakers that took care of that little sonic weakness.
Are the Magico V2s perfect? I spent some time looking out for weaknesses and the only thing that came to mind was that the images could seem a little larger than real-life, but they did not sound artificial; instead the larger images make it seem as if you are sitting in the front row with the music enveloping you. It makes the listening experience a bit more intimate.
Would I buy them? If I have the money, yes.
Email Post
Labels: magico v2 nagra nano-tec ring radiator tweeter soulution