I just spent a very pleasant afternoon at Audio Image in Section 19, Petaling Jaya, chatting with Adrian Wong and listening to the Soulution amplifier that he brought in.
Soulution is a Swiss marque that makes high-end components. It is a relatively new company but it aimed for the sky and audiophiles are now comparing its products with the likes of Vitus Audio and FM Acoustics.
In fact I have come across one online forum where one audiophile said the only amp that he had heard which was better than the FM Acoustics was the Soulution.
The high-end manufacturer is actually a branch of Spemot AG, which makes electrotechnical devices and e-motors for the automotive industry and professional and semi-professional tools. Since the owners are music lovers and hi-fi followers, they decided to focus on their passion.
Soulution has only seven products - the 700 monoblocks, 710 power amplifier, 720 and 721 preamps, 740 CD and 745 SACD players, and the 750 phono preamp. 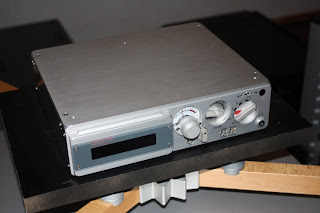 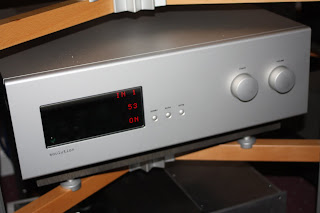 The Soulution 721 preamp
At Adrian's showroom, he had a Nagra CDC CD player connected to a Soulution 721 preamp and a 710 power amp driving Audio Physics Avanti V speakers.
Beside the Nagra was the huge Kuzma Stabi XL turntable with Kuzma Airline tonearm and Benz Micro LP cartridge. Speaker cables, interconnects, power cords and the phono preamp were all custom-made by Adrian and his gang of audiophiles.
I had with me the usual CDs I use for auditions - an xrcd edition of Dire Straits' Brothers In
Arms and Live At Blues Alley by Eva Cassidy. 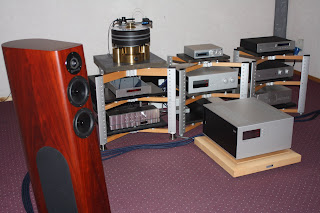 The system at Adrian's Audio Image. Note
that the speakers were placed a long
distance from the rear wall.
The speakers were placed a few feet from me, more than 10 feet from the rear wall and about two feet from the side walls, and were toed in to face me.
Given its reputation, I was not quite sure what to expect. When I first saw the pre and power amps, I was taken aback by their sheer size. The photos on the Soulution website are misleading - these components are as big as the Vitus amps and look like huge boxes. They look just like German products - functional without flair. 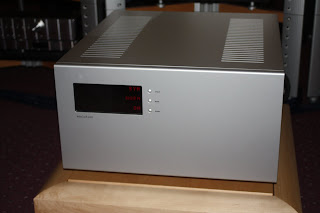 The Soulution 710 power amp is
huge and looks very German in design.
And the sound? It is grainless with holographic imaging, transparent, clear and punchy.
The highs are so smooth that sometimes you are not even sure they are present. And perhaps that is its only weakness - the treble is a little bit polite, at least in the system I heard.
Vocals are neutral and the bass went real deep and tight even though the amp is rated at only 120 watts into 8 Ohms. Its maximum output current of 60 Amps must have helped and not to mention the damping factor in excess of 10,000.
On Track Six of the Dire Straits album, Ride Across The River, the Soulution produced deeper, tighter and more controlled bass than what I have heard from my resident Sugden C28 pre/Bryston 3B SST power amp driving ATC SCM40s.
Adrian remarked that the Soulution is the best amp he has ever heard and he has heard plenty.
"It is neither tube-like nor transistor-like. You can't tell," he said.
Soundstaging was huge and went beyond the speakers' edges and though the speakers were placed quite a distance from the rear wall, the soundstage seemed to reach back to the rear wall. It was cavernous especially when he took out some of his favourite albums and played them on the Kuzma. 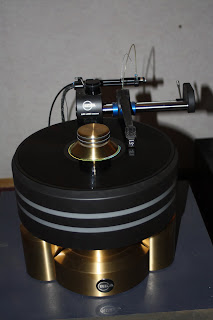 The Kuzma Stabi XL turntable with Kuzma
Airline tonearm and Benz Micro LP cartridge.
It had been quite a while since I had heard analogue of this quality and when he played Ma from Rare Earth's album cut in 1973, things started rocking quite a bit.
Good analogue has the uncanny ability to throw images all over the place, sometimes way beyond the edges of the speakers. And the Kuzma could render good analogue sound despite some clicks and pops and I was tempted to get my ol' Rega Planar 3 to spin again.
Audiophiles in Asia consider the Soulution, Vitus and FM Acoustics as the three best amps extant and at this super high-end level, it is like comparing a Ferrari with a Porsche and a Lamborghini. They are all excellent products with minute differences and it eventually boils down to personal preferences and the other components in the hi-fi chain.
If I really want to nitpick, I would say the FM Acoustics amp sounds slightly faster and more rhythmic while the Vitus sounds more timbrally correct, especially in the treble region.
But these are minor differences and bear in mind I heard the three high-end amps in different rooms with different speakers and CD players.
The Soulution was not that hot even after driving it hard for about two hours. It was the same for the FM Acoustics, which has what they call an "enhanced Class A" circuit and the Vitus even when played in Class A mode. I honestly don't know how these high-end guys keep things cool.
I wouldn't mind buying the Soulution, but I would have to sell my apartment to pay for them.
Email Post