End of the CD player?

There has been some buzz among hi-fi circles that the days of the CD player are numbered.
And what will replace it? DVD-A? SACD?
No, the most likely replacement is the hard disc player. It comes in many forms but essentially it uses music files stored in computers or the hard disc player itself which is then linked to an external DAC (the hard disc player may have a built-in DAC) and then to the usual pre/power amps and speakers.
The music files are usually in Apple Lossless or WAV format.
Some audiophiles say this is a better method as when a song is played, there is no moving part unlike a CD player which has a motor to spin the disc and another motor to drive the laser which result in data errors and jitter. (Note: no spinning parts apply only to solid state or flash memory.)
At the recent KL International AV Show, at least three dealers had such systems set up. 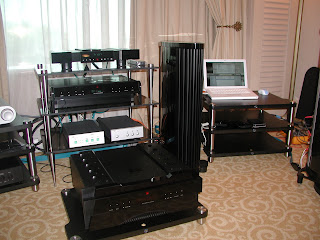 The MacBook (right) is the music source

The Weiss Minerva DAC
In the first booth, a MacBook with songs in Apple Lossless and WAV format was linked to a Weiss Minerva DAC with a firewire which fed the Gryphon pre/power amps and the Wilson Benesch ACT C60 Limited Edition speakers.
Weiss's website www.weiss-highend.ch has this to say:
In high-end audio circles there is a trend towards high resolution file downloads from dedicated websites. Such downloads need a D/A Converter which can convert the high resolution files, e.g. uncompressed 96kHz / 24 Bit audio, to analog. And this in a quality which the audiophile connoisseur has come to expect from digital audio playback. The Minerva accepts digital audio in Firewire or AES/EBU and S/PDIF formats at rates of up to 192kHz at a 24 Bit wordlength.
Features of the Minerva:
Inputs: Digital Audio inputs on Firewire (two connectors), XLR, RCA and Toslink (optical). (Firewire 800 via an appropriate adapter cable).
Outputs: Stereo analog output on XLR and RCA. Digital Audio output on Firewire, XLR and RCA. (Firewire 800 via an appropriate adapter cable).
Sampling Rates, Wordlength: 44.1, 48, 88.2, 96, 176.4, 192 kHz at up to 24 Bits.
Software:
- Windows XP: 32-bit and 64-bit are supported
- Windows Vista: 32-bit and 64-bit are supported
- Mac OSX: Universal binary supports 10.4.11 and up, 10.5.2 and up on Mac Intel
and PPC platforms.
Frontpanel controls: One power switch, three input selector switches with corresponding LEDs.
Other features: Volume control via frontpanel switches, volume dim switch, insert mode for inserting any digital device (EQ etc.) in the signal path.
In the second booth, a MacBook was connected to an Ayre QB-9 USB DAC which uses Wavelength Audio's new "asynchronous" USB technology called Streamlength software.
Ayre's website www.ayre.com has this to say:
The QB-9 is destined to convert your computer into an uncompromised digital library of your favorite music. A simple USB connection engages the Asynchronous transfer mode ensuring accurately timed music with jitter levels over a hundred times lower than previous USB solutions. Our minimum phase digital filter and single-pass 16x oversampling technology release layers of musical resolution—uncovering the emotional soul of your music. 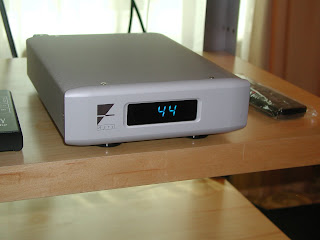 The Ayre QB-9 USB DAC
Features:
Asynchronous transfer mode for USB input.
Minimum phase digital filter.
Single-pass 16x oversampling.
Zero feedback, fully balanced discrete circuitry.
Equilock circuitry for active gain devices.
Ayre Conditioner (patent pending) power-line RFI filter.
AyreLink communication system.
Maximum Output Level
2.05 V rms – unbalanced outputs
4.10 V rms – balanced outputs
Frequency Response
DC - 20 kHz (44.1 kHz sample rate)
DC - 22 kHz (48 kHz sample rate)
DC - 40 kHz (88.2 kHz sample rate)
DC - 44 kHz (96 kHz sample rate)
Signal/Noise
110 dB (unweighted)
Input
1 USB, 44.1 kHz, 48 kHz, 88.2 kHz, 96 kHz (up to 24 bits)
The Ayre QB-9 USB DAC was connected to the Krell S300i integrated and Avalon Acoustics NP Evolution 2.0 speakers.
In the third booth, the Naim HDX Hard Disk player was used and linked to Naim pre/power amps with power supplies and the ProAc D28 speakers.
Naim's website www.naim-audio.com has this to say:
The HDX reads audio data from CDs, stores it on a hard disk, catalogues the artist, album and track titles and, at the touch of a screen, replays it with utterly uncompromised sound quality. The HDX's ease of use defines elegant simplicity and it even offers the option of operating as a high-end CD player by directly playing a disc loaded in its drawer.
At the heart of the HDX is a fully integrated CD ripping and data storage system, engineered by Naim — both hardware and software — from the ground up to optimize audio quality. When a CD is inserted in the HDX drawer it is mounted on a specially selected audio grade transport mechanism and each of its data sectors read multiple times at varying rotational speeds to ensure that the subsequently stored data is "bit perfect". Unique Naim firmware effectively handles copy protected CDs that in most other hard disk music players are likely to be ripped with compromised audio quality. The same firmware also overcomes the track start and end errors that occur in most other hard disk players and ensures that artists' intended track lead in and out times are preserved — again, in contrast to most other players. The bit-perfect data is stored on two 400GB disk drives — one primary and one back up.
HDX playback begins with a unique Naim designed, multiple power supply PCI interface that feeds the audio data to the digital to analogue conversion stage. The HDX digital audio architecture is not limited to 16 bit and 44.1kHz but can handle bit depths up to 24 bit and sampling frequencies up to 192kHz. 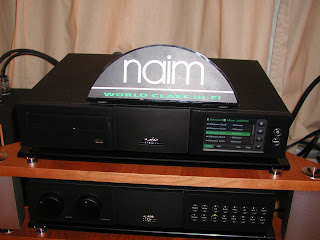 Naim HDX Hard Disk player (top)
Features:
Independent and separately grounded multi-regulated power supplies for analogue and digital stages.
A Burr-Brown PCM1791A digital to analogue converter selected after exhaustive listening.
24 bit/192kHz internal architecture with support for hi-resolution audio formats.
Ultra low jitter re-clocking circuits.
A seven pole analogue output filtering using Burr Brown OPA604 op amps.
Custom designed monolithic air core transformer isolated analogue output stages.
An optional external XPS or CD555PS power supply for even greater musical performance.
In use the HDX is intuitive, satisfying and simple, and, thanks to an internet connection, automatically catalogues every ripped disc.
Observers say CD players will not fade away so soon because there are millions of them in millions of homes all over the world.
What will happen will be like the time when CD was just introduced. The popular medium then was the cassette. CD and cassette players co-existed for many years before the latter declined in popularity and faded away from the scene.
Of course, there are still lots of people out there using their cassette players, but nobody makes them anymore and cassettes are difficult to find these days and are used mostly for voice recorders.
Even the once ubiquitous Sony Walkman has faded away to be replaced with today's iPods and MP3 players. And digital voice recorders are now marketed with built-in memory and MP3 as an additional feature.
Things are a-changing....
Email Post