A tale of three USB cables

After I had taken a Kimber Ag USB cable from Hi-Way Laser in SS2, Petaling Jaya, for review, I decided to get a few more for a shoot-out with my resident Furutech USB cable.


That was how I ended up with USB cables made by Voodoo (from Absolute AV Gallery) and  DH Labs Silver Sonic (from Acoustique Systems from Amcorp Mall).


Those who still claim that USB cables should not sound different should just test two USB cables - a Cardas and a Furutech.


They do sound different. Just don't ask me why. Of course there are lots of theories, but nobody has quite come up with the best answer as to why the transfer medium of digital signals can change sound quality.


I tested the three USB cables using an old Toshiba laptop running Windows 7 64-bit and J Rivers V17 to the resident Wyred4Sound DAC-2, Bryston 4B SST and the ATC SCM40s.


This is the follow-up to Kimber's successful copper USB cable, which was the first audiophile USB cable to be marketed.


Initially Kimber's USB cables had ferrite beads, but following comments that the beads attenuated high frequencies, the later batches were marketed without the beads.


It also uses a dual connection system - crimped and soldered. 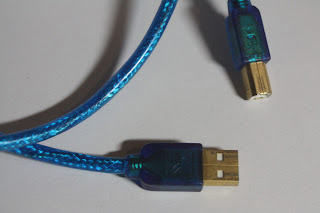 The Kimber turned out to be the most natural sounding of the lot with the best rendition of voices.


The voices of K.D. Lang and Frank Sinatra sounded most natural without any sibilance and with the right body and register.


The Kimber also produced a wider soundstage and on some tracks I could hear voices or music 'emerging' from way beyond the speaker boxes. 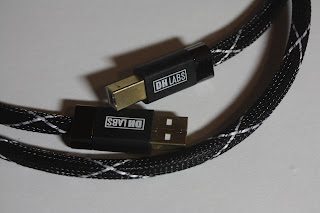 "At these frequencies, it is very important to maintain the very tight control over the insulation thickness, and we also cable (twist) the conductors on a machine that runs slowly and with uniform (constant) tension. These techniques combine to maintain a highly uniform characteristic impedance, which minimize signal reflections (and thus cable induced jitter). At Megahertz (and Gigahertz) frequencies, cables behave as wave guides. Dimensional discontinuities - such as inconsistencies in insulation thickness or non-uniform spacing between the conductors - are a major reason for poor digital cable performance.


"Finally, we use 100% shield coverage (the shield is also wrapped at constant tension, to avoid "VSWR spikes") and top quality connectors."


While the DH Labs D-75 coax cable is an excellent performer, the same cannot be said of its USB cable.


This turned out to be lean sounding with an edgy presentation and a small soundstage.


I would gladly recommend the D-75 coax, but the USB cable was quite a disappointment.


"The Magic Bus USB 2.0 Cable is built with a 99.999% pure silver positive conductor with high bandwidth Mylar shielding to boost the signal gain, while controlling cross-talk and noise along the induction field in the standard twisted pair geometry of a USB cable. The Magic Bus USB 2.0 Cable is the same conductor geometry and conductor materials design as our Reference Digital AES-EBU cable," the Voodoo website said. 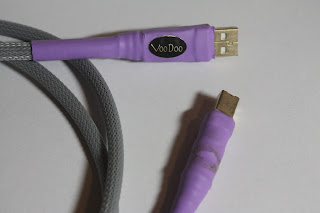 The conductors have also been cryogenically treated.


The Voodoo sounded slightly brighter than the rest and actually was most like the Furutech in character.


However, voices - especially male - sounded a bit lean with a slight lack of body.


It has to be noted that the USB cables were also system-dependent. With the review system, the Kimber sounded just right but when I switched the speakers to the PMC Twenty24 floorstanders, which are inherently smoother sounding, the sonics became somewhat duller and the Voodoo actually was a better match with the slight brightness counteracting the speakers' mildly dark tonal balance.