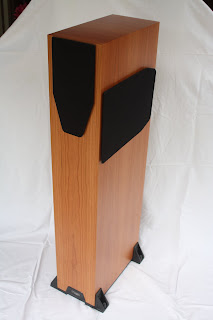 Many years ago, I listened to a pair of Rega Elas and thought they sounded good and if I had money back then, I would have bought a pair.


A couple of weeks ago, I was in Asia Sound in Amcorp Mall, Petaling Jaya, and I saw a pair of Rega RS7 floorstanders and thought it would be interesting to find out how Rega speakers sound like these days. And so the speakers ended up in my house for a while.


Rega Research from England is well known for its turntables that deliver the goods at low cost. Remember the Rega Planar 2 and 3? Almost as good as the Linn Sondek but much cheaper. These have been replaced by the P2 and P3 and the top turntable is now the P9 with the RB1000 tonearm.


Unfortunately, its range of speakers is not even as well known as its CD players such as the Planet and Apollo, but that does not mean that they are dismissable.


Rega have always based their speakers on the quarter wave transmission line loading system which is supposed to have good bass and high sensitivity. Thus instead of bass being augmented by sound waves being generated at a port like the bass-reflex loading system, the back waves of the speaker units travel along a labyrinth to an opening either on the front baffle or side of the cabinet. 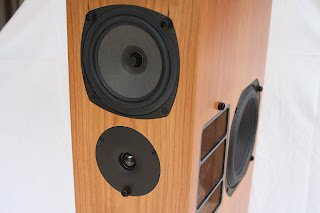 The tweeter is below the mid which is
reminiscent of the Mission speakers.
Note the side-firing bass and labyrinth opening.

In the case of the Rega RS7, the opening is at the side just beside the bass driver. This is covered with a black grille which together with the front angular grille covering the tweeter and mid driver gives the Rega an instantly recognisable look.


The Rega RS7 speakers are floorstanders which measure 98.8cm tall(without spikes), 34.6cm deep and 24.6cm wide. Since they are quite slim, they have outrigger spikes for stability.


When I had these speakers, I was still using the Bryston 3B SST and 3B SST2 power amps. The preamp was the Sugden C28 while the CEC 3300 spun the discs.


Switching from the resident ATC SCM40s to the Rega RS7s revealed the latter's strengths and weaknesses - the Rega speakers were good at creating a huge soundstage especially vertically. When playing classical music, the scale and size of the orchestra were quite realistically recreated. 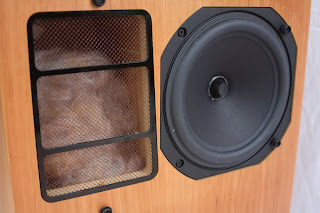 Note the acoustic wadding inside the labyrinth.

The speakers also had the ability to reproduce crescendoes and fortissimos realistically and effortlessly.


But the Rega RS7s sounded a bit lean in the mid-bass region which gave the music less body. Also, the images were smaller - instead of a mid-row presentation, it was as if the listener was a few rows further back.


However, like other Rega products they sounded 'musical' and if you are not the type to nitpick, they can sound quite satisfying.


Rega recommends placing the speakers with the side-firing woofers facing outwards and that was what I did and there was no problem with the sound. But I decided to face the woofers inwards to find out what would happen and I was shocked by the sudden collapse of the soundstage and imaging - it was as it I had wired them out of phase.


Unlike some other speakers, bi-wiring them did not make much difference and a single run of speaker cables should suffice.


When I spoke to Phil Freeman, who is effectively the CEO of Rega Research, in February, he said there are two types of audiophiles - one who would fiddle around with the components to get what he thinks is the right sound and the other who just plays music and enjoys himself.


If you are the latter type, the Rega RS7 should suffice and would provide many years of enjoyment.