CD mats have been around for years - some are glued onto the discs, some are placed on them and at least one is 'charged' by exposing it to light and it glows in the darkness of the CD compartment.
Some months ago, Khwang of Smart Home Solution in Puchong, Selangor, played a CD for me and then opened the tray and slipped in a black mat and played the same track again. There were some improvements and he handed me the Mo Audio mat for review.
The Mo Audio mat, sourced from Taiwan, is simply a thin sheet of black material, which feels like some kind of vinyl. Both sides look the same and either side can be used - simply put the CD on the tray, place the Mo Audio mat on top of the CD and press the 'play' button. 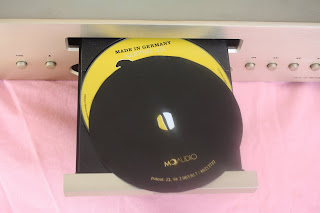 Some CD mats are too thick and the tray cannot close or they are too soft and fold up when the tray closes. I did not encounter these problems with the Mo Audio mat on the CEC CD player.


When using CD mats, the main complaints are that they cause the laser to skip, they shorten the lifespan of the motor since the load is increased and, of course, there is no difference in sound quality.


The Mo Audio mat did not cause any skipping in the past few months that I have been using it. There is no way I can comment on the lifespan on the motor but what I can say is that I have not heard any whirring sound or any indication of the motor in distress.


As for sound quality, I must say there is some improvement in the bass region and there is less high frequency hardness. Images become more 'solid' and stable and the sound quality is generally smoother, especially the vocals.


I tested CDs of various thicknesses and types and found that it worked particularly well with hybrid CD/SACD discs. When playing the CD layer of the hybrid disc, I always get the feeling that the CD player's laser is straining to read the pits and often details that I hear when I use the Sennheiser HD600 headphones are missing when I play music through the speakers. With the Mo Audio mat, more details are heard and the music sounds more relaxed.


I also noted that there was less difference in sound quality when I used the headphones and played the same track with and without the mat.


The least difference in sound quality was when I played the HD Mastering CD which already has a damping layer. It appears that over-damping is not the right thing to do.


I also played a DVD with the Mo Audio mat and the colours were slightly more saturated and distortions on diagonal lines when the camera was panning were reduced.


Khwang said they tested several CD mats before deciding to market the Mo Audio mat. The retail price is RM288 each.
Email Post