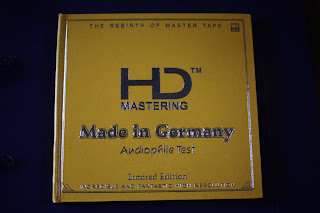 The yellow CD that caught my attention.
There I was window-shopping in Amcorp Mall when I passed by Victoria Music and decided to pop in for a look.
I headed straight for the audiophile section and saw the usual suspects - audiophile female vocalists, some Chinese audiophile releases, a few xrcd CDs... One bright yellow CD caught my eye.
It turned out to be a HD Mastering CD which promised "Incredible and fantastic high resolution". It delivered that promise, and audiophiles in search of the highest level of clarity and detail will have to listen to this new range of CDs. 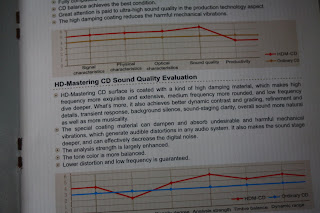 Notes and graphs explaining how the technology works.
There were some notes inside that described the technology involved in making the CD.
First the master tapes were used and tracks copied to a hard disk which was then used to make the stamper. Normally the master tapes are burnt onto CD-Rs which are used to make the stamper.
Secondly, the HD Mastering CD uses a special liquid crystal panel which is more transparent than the polycarbonate used in normal CDs.
This high transparency enables the laser to read the pits better and to reduce errors caused by vibration, the CD has a layer of high damping coating.
This new type of audiophile CD is apparently made by a Chinese company called ABC (International) Records based in Guangzhou, China.
When you buy this CD, you actually get two copies - one as a back-up copy presumably or you could have one for the home rig and the other for the car stereo system.
ABC (International) Records offers a total of 16 titles featuring English and Chinese songs. Among the artistes are popular Taiwanese songstress Tsai Chin and country singer Crystal Gayle.
The CD I bought was made in Germany for audiophile testing. It features 21 songs specially selected for testing dynamics, imaging, bass, treble, live ambiance and voices.
I must say the sound quality was pretty amazing and even my brother-in-law, who is a New York-based American music producer and composer, commented that it sounded really good.
The music was rendered with sparkling clarity and it just goes to show that the Red Book format, despite its limitations, can sound really remarkable if good recording and mixing equipment and techniques are used along with high-grade plastics, stringent quality control and some innovation.
Email Post