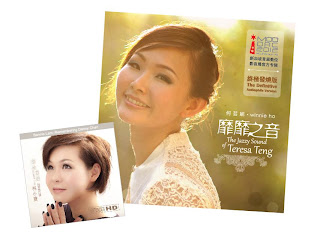 Local audiophile and Chinese Jazz label, pop pop music is celebrating its anniversary in July, and to commemorate the occasion it is releasing its most sensational recording to-date - “The Jazzy Sounds of Teresa Teng” album sung by Chinese Jazz Songbird Winnie Ho - in a Limited Edition “Definitive Audiophile Version”.

The Normal Edition of this album was released in March 2012 and has so far sold over 2,000 copies, an incredible record in trying times.

The album, exclusively distributed by Popular Books CD-RAMA, is a jazzy and bold interpretations of Teresa Teng classics and has received rave reviews in Hong Kong and Taiwan and is highly recommended by local magazines like The Edge Business Investment and Financial Weekly, Hi-Fi Unlimited blog,  and famed Sabahan reviewer, Joanna Funk.

The icing on the cake is that the album has been chosen as “The Official Vocals CD” of Singapore’s MOD DAC (Digital Audio Convention) 2012, the inaugural Audio-Visual Show in Singapore，which is going to be held on 25-26th August 2012.
Prior to the launch of the Normal Edition, pop pop music released a Free Hi-Res 24/96 download of one of the songs in the album, “Forgetting Him”,  to great response.  The traffic was so high that the Dropbox hosting server had to ban it as it exceeded the download limit.

This time for this Definitive Edition, pop pop will release another track, “Girl From South Sea”, a wonderfully recorded tune, in the same 24/96 Hi-Res format, on 18th July 2012.

To make this special edition worth collecting, the price will be most affordable at RM49.90 and it will carry a unique serial number and a bonus CD: Bonnie Lam “Remembering Danny Chan” CD, worth RM54! Bonnie Lam is a Hong Kong singer from music label Rock In Music, a partner of pop pop music in Hong Kong. The tribute album to Danny Chan has great recording and is touted as Keith Yip’s, Rock In’s Boss and Producer-cum-Mastering-Guru “Best Recording To-Date”.

This special promotion is limited to only 300 copies. It will make its debut in KLIAV show on 20th July, at the InterGlobal Malaysia stall.