In the past, those who wanted to upgrade and tweak their Rega turntables had to order the Groovetracer sub-platter from the United States and pay import tax plus courier charges for it.

And some people have noticed (or complained) that with the Groovetracer subplatter, the so-called 'Rega sound' is gone. In its place is a neutral and relatively less exciting sound.

Many audiophiles have found out that Rega turntables, especially the lower-end models, spin at a slightly faster rate - instead of 33 1/3 rpm, it spins at 33 2/3 or faster. This tweaking of the pitch makes the Rega turntables sound lively and upbeat.

However, when I met Phil Freeman, who is effectively the CEO of Rega Research, in February this year, he denied that Rega had designed their turntables to spin faster to create the 'Rega sound', but he did say that the turntables are checked if they spin accurately before they are shipped out and the parameters of quality control are such that they are passed for sale if they spin faster rather than slower.


His sub-platter has a hub made of high-grade aluminium with designs engraved on its surface to slow down vibrations. The axle is made of polished hardened stainless steel. The spindle is also made of steel.


Michael Lim's sub-platter, which costs RM450, comes with a small packet of lubricating oil, but you will have to use the original Rega ball bearing and belt. 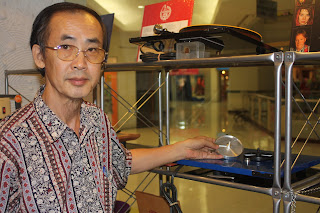 Michael Lim is aware that the original Rega plastic hub is slightly smaller than needed to ensure a perfect 33 1/3 rpm spin.


Thus he makes his sub-platters in two sizes - Model One's hub diameter is 101.85mm while Model Two's hub has a diameter of 101.15mm, which is the same as the Rega sub-platter.


From his tests, he has found that using the Model Two on the P3 and P5 results in the record spinning at the same speed as when the original Rega sub-platter is used.


Using the Model One on the P1 and P2 results in the record spinning at exactly 33 1/3.


Is there a difference in sound quality?


"When spinning at exactly 33 1/3 the sound is duller, but smoother and more detailed. When spinning slightly faster, the sound is livelier," said Michael Lim, whose earlier design was a vinyl platter to replace the original glass one.