Get ready for a 3-D experience at this year's edition of the KL International AV (KLIAV) Show which will be held from July 23-25 at J.W. Marriott hotel, Kuala Lumpur.
Three major TV manufacturers - Samsung, Sony and Panasonic - will be demonstrating their 3D TVs at the show, Organising Chairman of the KLIAV Dick Tan said Wednesday. 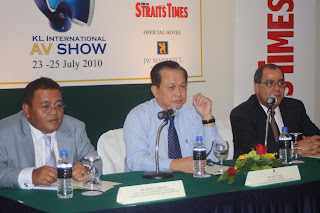 Organising Chairman of the KLIAV
Dick Tan (centre) at the launch of the show.

"There will also be great discounts for large-screen LCD and plasma TVs," he said at the official launch of the KLIAV at J.W. Marriott hotel.


Dick said some 90 per cent of the booths has been taken up and among the new brands to exhibit at the show are SVS, an American maker of sub-woofers and home speakers, and Nakamichi, the well-known Japanese brand that has kept a low profile in the Malaysian market for a while.


Dick added that the mood in the industry is very "gung-ho" this year with the recovery in the economy and the introduction of new technology like 3D TV.


Most of the big boys in the audio industry have signed up and audiophiles can expect to check out the latest models from the major marques.
Email Post
Labels: kliav