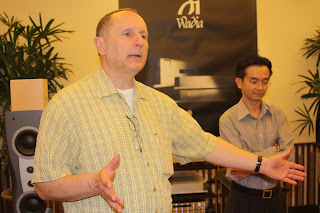 James Shannon, Wadia's vice-president of
international sales, revealing more about Wadia's
new products. Next to him is the boss of CMY Audio John Yew.

James Shannon, Wadia's vice-president of international sales, was in a major New York music store a few weeks ago when he overheard the young store manager trying to convince a group of even younger walk-in customers to buy some stuff.


The store manager told the would-be buyers all about the sound system in the store - the speakers, the amp, the CD player...and the group of youths said something like: "Huh, CD player? Why do you need that?"


Welcome to the new world of music in which the kids, who would become the buyers of high-end hi-fi later, are growing up with iPods and music downloads and Internet streaming.
James said we are witnessing a paradigm shift in the music industry.


"When the CD was introduced, it was a totally different medium from the LPs that people were playing. The CD was convenient, could last longer, was easy to use and it soon became popular. That was a paradigm shift.


"When new formats like SACD and HDCD were introduced, people thought of them as better-quality CDs and they never caught on.


"But now the Internet is causing another paradigm shift - iTunes and music downloads are changing the industry," he said.


And Wadia, the American firm famed for making top-end CD players and Decoding Computers (other companies would call them DACs), has made the right moves to make its products relevant and appealing to the new generation of iPod and MP3 kids.


James, who was at CMY Audio & Visual in Damansara Utama, PJ, on Thursday for a presentation of new Wadia products, said Wadia is working with several partners to come up with products for the iPod generation.


The first product in collaboration with Apple was the Wadia 170iTransport which turns the iPod into a music file server that has the potential to sound good with a top-flight DAC. This was followed by the 171iTransport which can be docked with the iPhone.


He said Wadia is now working with another partner to come up with solutions - he thinks the future for Wadia is not so much a network or hard-disk player, but a file manager with a good user-interface.


"People already have lots of downloaded songs in their computers which are already linked (wired or wireless) and they may have replicated titles in the computers. They won't want to load all their music files to another server. So I think a good file manager would work. It will be like a librarian working fulltime to keep things organised," he said.


James said the issue of unreliable transports of Wadia's CD players has been solved following its collaboration with an Austrian CD transport specialist called StreamUnlimited to design and make Wadia's best-sounding transport ever which is used in the 381i and S7i CD players, and 171 transport. 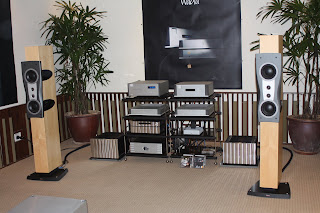 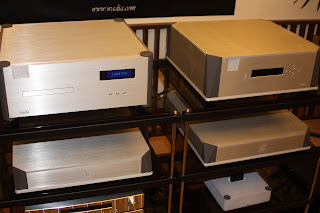 The Wadia components on demo.

During the demo session, the Wadia 171 transport was used together with the three-box 931 Digital Controller and 921 Mono Decoding Computers. Amplification comprised the Jeff Rowland Criterion pre and the 301 Monoblocks feeding a pair of Dynaudio Confidence C2s.
Plus the 170iTransport was also used to play a few Apple Lossless files.


James said the Wadia 151 PowerDAC mini, a DAC-cum-digital amp (made with input from a Korean partner that makes the PCM chips) featuring Hewlett-Packard output devices, will be in CMY showrooms soon. The PowerDAC mini is a 50-watter with one USB, one Toslink and two Coax inputs in a box the same size as the iPod dock.


He added that the 9 series transport, which will supersede the 171, is still a work in progress as the designers are trying to make it the best Wadia transport ever. It will also use a transport mechanism made by StreamUnlimited. 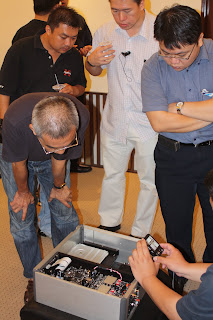 Audiophiles looking at the circuitry
of the Wadia 381i CD player.

On why Wadia chose a new distributor in Malaysia, James said it was the right time for Wadia to be represented by a dedicated partner to improve market presence instead of being treated as an appendage of a company based in Singapore.


"Malaysia is a growing market with an increasing number of middle-class buyers who are getting sophisticated," he said.


On whether the CD player was doomed, he said it will still be around as there are millions of people with millions of CDs who will play them on CD players. The situation is just like people still playing LPs with turntables. Ironically, he heard two of the best turntables only recently - almost three decades after everybody predicted that turntables would fade away when the CD player was introduced.