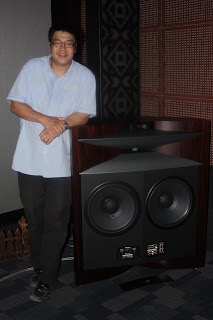 Manager of Flagship AV Koh Yee Phok
standing next to the JBL Everest.
They lack finesse, sibilants are emphasised, the high notes can be too sharp, the tempo is too fast and the images are much larger than life.


But they can give you the sonic equivalent of a roller-coaster ride - the thrills and spills and sonic booms that only a pair of big, loud and fast speakers can create.


The JBL Project Everests 66000 II are not for the faint-hearted and you can expect to be shaken and stirred when you hop on board for a wild ride on the sonic roller-coaster.


I had the privilege to listen to the first and only pair (so far) of JBL Everests in Malaysia on Friday at Flagship AV in The Waterfront@Parkcity, Desa Park City, Kuala Lumpur, and was thankful that I remembered to take my high-blood pressure medication in the morning. The speakers are like sonic Shinkansens (Japanese bullet trains) and the musical journey is simply exhilirating and will leave you breathless.


I had with me two CDs - Eva Cassidy's Time After Time and Dire Straits' Brothers In Arms and some Frank Sinatra songs burnt to a Taiyo Yuden CD-R.


I had never heard Eva Cassidy's songs rendered so fast before - the tempo seemed to have picked up and everything just seemed snappier and quicker - from the guitar picking to the drumbeats.


Everything seemed bigger too - the singer, the drums, the bass guitar, the cymbals, the lead guitar, the piano and all other instruments recorded on the CD were magnified and the perceived size of their images were gigantic.


Some speakers offer a back-row presentation, some a front-row presentation. The JBL Everests make the listener feel as if he is mingling with the band on stage. Not only that but he is listening to the instruments up close - like inches away. Imagine that you are standing next to a percussionist playing the congas and you lean forward and turn your head so that your ear is maybe a few inches from the drum-skin - that is the kind of sound that comes from the JBL Everest.


The music just leaps out in an explosive and impactful manner in an ultra-dynamic way. There is no overhang, no prolonged notes - just quick, sudden spurts of music.


The sound stage is big horizontally and vertically, but depth is limited. In fact, the soundstage seems pushed forward and the music can sometimes be in your face.


If you are from the valve amp, especially the SET, camp, don't attempt to 'conquer' the Everest. It's way too fast and furious.


The Everests, now in Mark II version, are JBL's top model and represent the best that the renowned speaker manufacturer's engineers could do in conjunction with the firm's 60th anniversary. 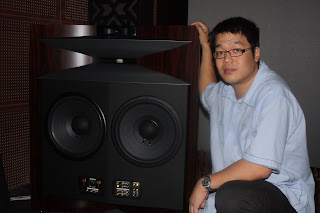 Koh explaining the frequency response of
the drivers of the JBL Everest. 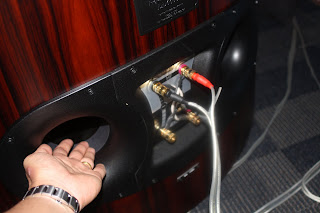 There are two large ports at the back.


To round up the demo session, Koh played the Top Gun BluRay disk and when the fighter jet took off, the sound level was deafening and the sofa I was sitting on vibrated.


And he also slipped in a Japanese percussion CD and when the taiko drum was hit, the sheer impact of the BOOM startled me and I actually jumped a little.


Koh said the JBL Everests will soon be moved to The Celebrities Club, a jazz joint, in Soho, Kuala Lumpur. But he has ordered another pair which should arrive in time (there's a six-month waiting list) for the KL International AV show.