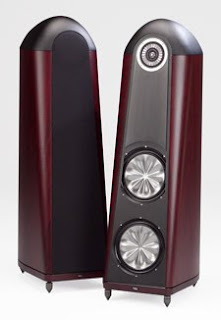 The late great speaker designer Jim Thiel should be remembered for some of the most unique and cutting-edge techniques that he utilised in his speaker units.
Topping his achievements should be his coincident tweeter/midrange unit used in the Thiel CS6, CS3.7 and CS2.4.
In the Thiel CS2.4, for example, it was a one-inch tweeter in the middle of a 3.5-inch midrange while in the CS3.7, it was a one-inch tweeter in a 4.5-inch midrange.
While coincident speaker units have been used before by British marques Tannoy and KEF and also the Canadian Coincident Speaker Technology (in its earlier Troubador range), Thiel's were unique as there was no electrical crossover between the midrange speaker and the tweeter. 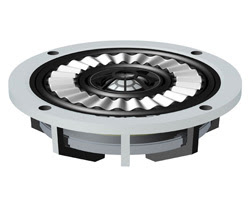 The coincident midrange-tweeter used in the Thiel CS3.7.
This is from Thiel's website: "The CS2.4’s most innovative design feature is the coincident 1-inch tweeter/3.5-inch midrange driver where the two drivers’ diaphragms share the same voice coil.
"This technique allows for the elimination of the midrange/tweeter section of the electrical crossover network as the drivers incorporate a mechanical crossover, and it eliminates the need for two driver magnet structures."
The surround that connected the tweeter to the midrange acted as the crossover.
Thiel felt this design allows drivers to achieve better time coherence. Such drivers can provide superior time alignment because the sound sources of both drivers are in the same location, and therefore the outputs of both reach the listener at the same time.
Another thing that he should be remembered for was the wave-shaped aluminium diaphragm that he used for the speaker units on the CS3.7, which was arguably his best design. 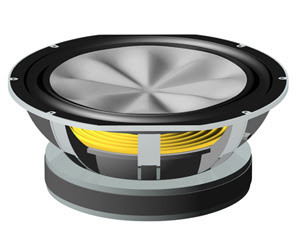 The woofer used in the CS3.7. Note the wave-shaped aluminium cone.
Other manufacturers had used aluminium cones before, but Thiel shaped the diaphragm like a wave to reduce cone resonances and for extra rigidity. Nobody had seen anything like that before.
I recall auditioning Thiel speakers at Centre Circle Audio in Taman Tun Dr Ismail, Kuala Lumpur, and at one time was contemplating buying a used pair of CS2.4s.
I heard two models at Centre Circle - the CS3.7 and the MCS1. Of the two, the CS3.7 was obviously the better - and more expensive - model.
I remember Pass Labs pre and power amps were used to power the CS3.7 (I can't recall which CD player was used).
Both the Thiel MCS1 and CS3.7 shared a similar sonic signature - they sounded upfront, dynamic and a bit on the bright side.
The CS3.7s were among the most hyper-detailed, transparent and clean-sounding speakers I had ever heard. They reminded me of Magneplanars except that the Maggies were not quite as bright.
Every rasp, breathing in and licking of lips by the singer could be heard - it was sonic bliss for those who craved for such detail and clarity.
However, I felt the bass could have been weightier and more muscular. But if you are not a rock or hip-hop lover and listen mostly to acoustic songs, jazz, country and classical music, the Thiel CS3.7s are up there among the megabuck luminaries.
Email Post