Audiophiles were mystified during the recent event on Computer Audio Systems (CAS) organised by hifi4sale when LS3/5A guru Jo Ki managed to change the tonality of music simply by changing the platforms and cones beneath an external hard disk drive connected to his Bryston digital music player. (For report on the event, click http://hi-fi-avenue.blogspot.com/2011/09/eye-opening-cas-session.html)

If only 1s and 0s are stored in the hard disk, how can using a piece of glass or plywood or ceramic cones or silicon-damped steel cones or soft-silicon-with-lead-balls cones change the tonality from bright to warm?

So I decided to attempt to solve the mystery by googling around and found this detailed article on the innards of an external hard disk drive written by Artem Rubtsov with excellent pictures taken by the author in hddscan.com. To read it, click http://hddscan.com/doc/HDD_from_inside.html 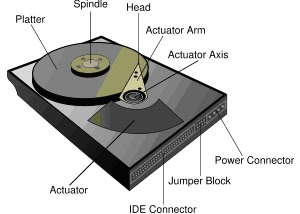 My hypothesis is that a hard disk, on closer examination, is somewhat like a turntable. It even has a 'tonearm' called the 'Actuator Arm' and a 'cartridge' called the 'Read/Write head'.

It also has a disc called a 'Platter' which stores the data in the form of different magnetic orientations of bits of a magnetic compound. Each bit of the magnetic compound is magnetised either North/South or South/North in a vertical manner by the 'write' head. When the 'read' head passes over it, it reads whether each bit is a 'North' or a 'South'. Thus if a 'North' is '1', then a 'South' is a '0'.

While in a turntable there is physical contact between the stylus of the cartridge and the grooves of the vinyl, in a hard disk there is no physical contact as the 'Read/Write' head actually floats on a very thin layer of air above the spinning magnetic disc.

Just like the tonearm of a turntable, the Actuator Arm moves across the disc in an arc to locate where the data of a specific file is stored.

A motor spins the magnetic platter at very high speeds while a voice coil actuator moves the Actuator Arm.

From wikipedia: A typical HDD design consists of a spindle that holds flat circular disks, also called platters, which hold the recorded data. The platters are made from a non-magnetic material, usually aluminum alloy, glass, or ceramic, and are coated with a shallow layer of magnetic material typically 10–20 nm in depth, with an outer layer of carbon for protection. For reference, a standard piece of copy paper is 0.07–0.18 millimetre (70,000–180,000 nm).

Perpendicular recording
The platters are spun at speeds varying from 4,200 rpm in energy-efficient portable devices, to 15,000 rpm for high performance servers. Information is written to, and read from a platter as it rotates past devices called read-and-write heads that operate very close (tens of nanometers in new drives) over the magnetic surface. The read-and-write head is used to detect and modify the magnetization of the material immediately under it. In modern drives there is one head for each magnetic platter surface on the spindle, mounted on a common arm. An actuator arm (or access arm) moves the heads on an arc (roughly radially) across the platters as they spin, allowing each head to access almost the entire surface of the platter as it spins. The arm is moved using a voice coil actuator or in some older designs a stepper motor.

From http://welloiledpc.com/diskmanager.htm: The hard disk is one of the most sensitive parts of the Computer (Notebook or Desktop), as it contains moving parts with extremely precise movements – almost like a mechanical watch! The platters of the Hard Disk spin at very high speeds – today’s Hard Disks spin at a minimum of 5,600 Revolutions per Minute (RPM), with faster Hard Disks spinning at 7,200, 10,000 or even higher RPMs! The Actuator needs to hunt out the sought data from these high-speed spinning platters! Therefore knocks, jerks, humidity, dust, very high/ very low temperature, heavy weights (placing a 10 Kg weight on your Hard Disk is an easy way to kill it!) – all these damage it very easily!

Many audiophiles have noted that turntables tend to 'reproduce' the 'sound' of the material it is placed on. This is especially the case when the turntable is a non-suspended design like a Rega. I have placed my Rega Planar 3 on Chinese tea cups and the resultant sound was 'porcelainly' while soft rubber footers made the sound 'rubbery'. This, I believe, is due to the resonant frequency of the footers changing the resonant frequency of the entire system (plinth, platter, mat, record, tonearm, cartridge, etc) which affects the sound.

In a turntable, this effect is likely due to the fact that there is physical contact between the stylus and the record and resonances will be picked up by the cartridge and amplified.

However, in a hard disk there is no physical contact and the 'read' head is merely reading the magnetic fields of the stored data while floating above the platter. So I don't think the 'read' head picks up resonances.

My hypothesis is that in a hard disk, the change in tonality when using different platforms and footers is probably due to microphonics since there are so many moving parts and the circuitry and chips look rather delicate.

When electronic equipment was built using vacuum tubes, microphonics were often a serious design problem. The charged elements in the vacuum tubes can vibrate and the motion would change the distance between the elements, producing charge flows in and out of the tube in a manner identical to a capacitor microphone. A system sufficiently susceptible to microphonics could experience feedback. Certain models or grades of vacuum tubes were made with thicker internal insulating plates to minimize these effects.

With the advent of solid state electronics (transistors), this major source of microphonics was eliminated but smaller sources still remain. The ceramic EIA Class 2 dielectrics used in high-K capacitors ("Z5U" and "X7R") are piezoelectric and will directly transform mechanical vibration into a voltage in exactly the same fashion as a ceramic microphone  does. Film capacitors using soft dielectric materials can also be microphonic due to vibrational energy physically moving the plates of the capacitor. Wiring and cables can also exhibit microphonics as charged conductors move around, and various materials can develop triboelectric ("static") charges that couple to the electronic circuits.