Furutech cleans up the act 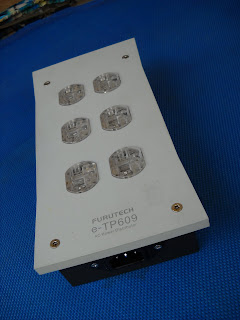 The Furutech e-TP609 Power
Distributor looks quite elegant
The Furutech e-TP609 Power Distributor is one of those fit-and-forget components.
Therefore I conveniently forgot all about it until Eugene Ngoh of Audiomatic phoned to remind me to return it.
It is one of those components that will make a vast difference when you plug it in and when you remove it from the system.
Before I had the e-TP609 to review, I was using an Eichmann power strip which is actually a rebadged Wonpro unit that, realistically, is only slightly better than the extension cord from the hypermarket. 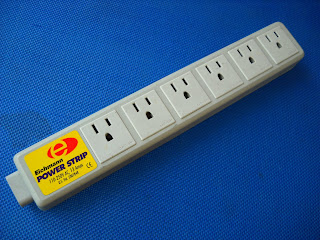 The Eichmann power strip
With the Furutech plugged in, using a Supra LoRad with MK UK plug to connect it to the wall socket, the difference in sound quality was immediately noticeable - the first thing I noted was the much lower noise floor. The second thing was that I could hear more low-level details - the so-called microdynamics - of the music.
It goes to show the amount of low-level information that goes missing when the noise floor is high. Cut the noise and the details will emerge - it's like wiping your camera lens clean so that the photograph will be much sharper.
The sound became smoother and the harshness in the treble region was gone. Music became more "fluid".
Unlike power regenerators and line conditioners/voltage stabilisers, the Furutech e-TP609 is passive and its only "active" component is a layer of GC-303 EMI-absorbent coating on the inner surface of its bottom plate.
It features the Axial Locking System which is supposed to solidly anchor the outlets to cut resonance and has mounting spikes to give the box stability and vibration control.
The box itself is shaped like a longish brick with a half-inch thick top plate which has its sides tapered inwards giving it a rather elegant look.
The chassis is machined from a solid block of aluminium and has six FP-20A(R) High Performance Rhodium-Plated phosphor bronze receptacles - for American plugs - which are starwired to the FI-09(R) IEC input.Inside the box, the receptacles are dampened with a special compound.
The power distributor, which is rated at 15A/125V, measures 266mm (W) x 130mm (D) x 56mm (H) and weighs a relatively hefty 2.85Kg which is very welcome as I have found that thick and stiff power cords can fling light components around. I used to own a Rega Apollo CD player that was tilted rather awkwardly whenever I used a stiff power cord.
Internal wiring uses the Furutech Alpha-22 3.8 sq. mm (about 12AWG)conductors to lower resistance.
Priced at RM3,900, the Furutech is not exactly cheap, but its build quality is excellent and it does work since the sound quality improves with it plugged in.
I was rather surprised to find that a pair of white gloves came with it and there were silicon covers for the unused plug receptacles. 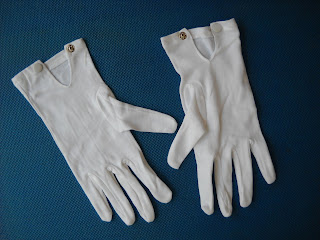 The pair of white gloves - great for an MJ lookalike contest 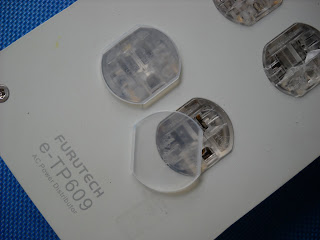 The silicon covers to protect the unused sockets 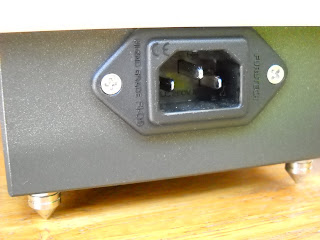 The power distributor stands on spikes
Soon after Eugene's phone call, I reluctantly unplugged the Furutech e-TP609 from the system and plugged everything back into the Eichmann power strip and heard all the harshness again.
The problem with reviewing this kind of component is that you will end up missing it.
So I ended up purchasing the cheaper e-TP60/20 Power Distributor from Eugene, who was smiling broadly when I signed the credit card slip...
Email Post
Labels: audiomatic e-TP60/20 Power Distributor e-tp609 Eichmann eugene ngoh furutech