Much more than just a USB DAC

The Furutech/Alpha Design Labs GT40 USB DAC with phono stage was a product that I had wanted to audition for quite some time since I read about it being praised by several hi-fi magazines after its launch last year as I was shopping around for a phono preamp then.
Eugene Ngoh of Audiomatic at Amcorp Mall, Petaling Jaya, told me he had ordered the GT40, but since I could not wait any longer I bought a Creek OBH-15 MM/MC phono preamp late last year.
Recently I found out that the GT40 had arrived and I managed to obtain one for review from Eugene.
Retailing at RM1,990, it is a pretty good buy as it has numerous functions. 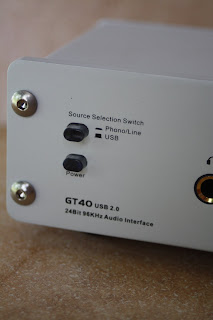 First of all, it is a USB2 DAC. Plug your laptop to it and it will process the streamed music at up to 24/96 resolution and send it through analogue outputs to your preamp/integrated amp.
Secondly, it has an MM/MC phono stage and you may end up spinning more vinyl than listening to hi-res files.
Thirdly, it is also an ADC (Analogue-Digital Converter) which you can use to convert your LP collection into digital files at up to 24/96 resolution and store them in your hard drive.
Fourthly, it is also a headphone amp.
It also offers a line input and a volume control that is smooth to operate.
All these functions are featured in a little aluminium box measuring 15cm (W) x 11.1cm (D) x 5.7 cm (H)  and weighing 785 gms.
The phono stage is quite basic and offers maximum input levels for MM cartridges at 5mV and MC cartridges at 0.4mV (input impedance for both MC and MM is fixed at 47K ohm) while gain is fixed at 62.5dB for MC and 48.5dB for MM.
The headphone amp is also quite basic and headphones of 6 ohm to 300 ohm impedance are recommended.
Its literature adds: “A first for this class, the GT40 features a phono equalizer for recording your precious LPs. Switch between Moving Magnet (MM) and Moving Coil (MC) or Line input
Highest Quality Parts: The GT40 features a high quality amplifier and condenser supporting its high performance analog circuit.
“The GT40 is equipped with gold-plated Teflon-insulated RCA jacks with an extremely high quality aluminum chassis and machined volume knob.”
To ensure that it is not noisy, the power supply is external.
The GT40 does not come with any recording software, but it recommends Audacity which is a freeware.
I started off testing the Furutech/Alpha Design Labs GT40  as a USB DAC and compared it with my Benchmark DAC1 Pre using a Furutech USB cable.
I must say that the GT40 is a colourful component - when it is powered on, the switch glows brightly in blue and when you press the source selection switch for phono, it glows in red and when you press it again for the USB function, it glows in yellow.
The sonic signature of the GT40 is best described as slightly edgy, upfront and ‘brightish’ which made it very suitable for rock songs. It was also less spacious and transparent - even though it sounded quite detailed - than the Benchmark. but the Benchmark retails at about RM6,500 and lacks the ADC and phono preamp functions.
This sonic signature of the GT40 was prevalent in all its functions - the headphone amp, the phono preamp, the DAC and ADC.
I used my pair of Sennheiser 600 headphones and compared the headphone amp in the GT40 with that in the Benchmark and the GT40’s characteristic sound was evident. It had no problem driving the Sennheisers which have impedance of 300 ohms.
Then I plugged my much-modded Rega Planar 3 with RB250 tonearm to the GT40. Initially I started off using a Rega Exact MM cartridge and later switched to a Benz Micro Glider SL MC cartridge. I must say that the MM/MC switch is rather tiny and I had to use a ballpen to flick the switch.

Regardless of whether an MM or MC cartridge was in use, the sonic signature of the GT40 prevailed. When spinning vinyl, the edgy sound complemented the neutrality of the Benz Glider. The GT40 sounded less transparent and spacious than the Creek OBH-15 phono preamp.
Finally, I decided to test the GT40’s ADC function.
After googling for the Audacity website, I downloaded the software to the Toshiba laptop and I had to google around for instructions on how to use it. After spending a few hours familiarizing myself with the basic commands, I made my first attempt to convert an LP to a digital file.
Using Ry Cooder’s Jazz LP, I managed to record two songs on Audacity. Then I had to perform functions like removing the clicks and noise and normalising the volume of the two channels.
Upon playback of the digital files, I found out that sampling at 96Khz sounded better than at 44.1Khz, the default setting.
I also found out that the removal of clicks, pops and noise also resulted in the loss of some music data. Bear in mind that I had just picked up some rudimentary skills in digitising analogue songs and Audacity is not pro software to begin with.
Also the LP was rather dirty and there were a lot of clicks and pops - and they were quite loud too. So if you are serious about digitising your record collection, you will have to give the LPs  a good scrub - the less noisy they are, the less harm the removal of noise and clicks will do to the digitised file.
Of course, you ought to pick up more skills than I did. Someone with more experience and knowledge of recording software should do a better job than I did.
But it all goes to show that with the GT40 in your system, you will be kept busy for quite some time checking out all its functions.
It is indeed a unique component and if you are looking around for something that does everything, well the GT40 is it.